CRIME, A New Series from Collage to GIF

This post and mini tutorial reads in reverse order. I’m posting the animations first to get you hooked, but all of the content here is based on the last image in the post. GIFs #1 & 2 in my new CRIME series have been generated above and below. They are both simple stop motion animations made from rubber stamp print cut-outs and several photo copied variations of other prints. I don’t know about you, but I’m a vintage graphics lover, especially pictorial symbols from the 1950’s, 60’s & 70’s. Simply put, those graphics can be called “flat design” which is a classic transcendent form of creating all kinds of graphic works of art. We sure see a lot of it today in mobil app design, logos and branding. Now a days it is easier than ever to create with software but let me come back to that part later.

After making my prints and cutting them out, I used the VINE app to shoot the first two animations. This works well because VINE also adds the 6.5 second film to your iPhone’s photo & video folder. I imported the videos into photoshop and animated them as GIFs from there. The two GIF animations below used slightly different approaches. The pieces further below are the first few static collage works in the series. These pieces are manual collage works. Old school style cut n’ paste pieces, they are not layers created in photoshop. Not that that would be a bad thing to do, but I still prefer to make manual works of art before I turn them into animations. I ask you, what is the value in that process? All of the collage pieces in this series are 8.5″ x 11″ on paper, 2015. The next step will be to create more individual animations and perhaps later splice them into an animated short film. I also plan on turning this in a classroom project for my CT101 class that I team teach at CUNY York college with my friend and colleague Michael Branson Smith.

After generating the first three GIFs above I began to find a narrative thread in the single animations and decided to extend it. I used the tumblr interface to tile 4 GIFs into a 4 channel installation. I really liked how it looked and decided to then use a mobile app called 8mm on my iPhone to capture the multiple animations. I love using multiple technologies and my devices to create grainy and degenerated manual filters so this works out perfectly. The GIF below is the first in the CRIME series. 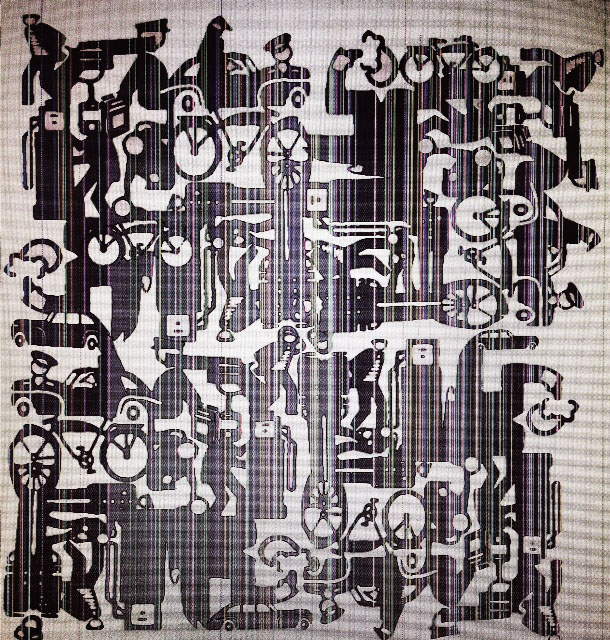 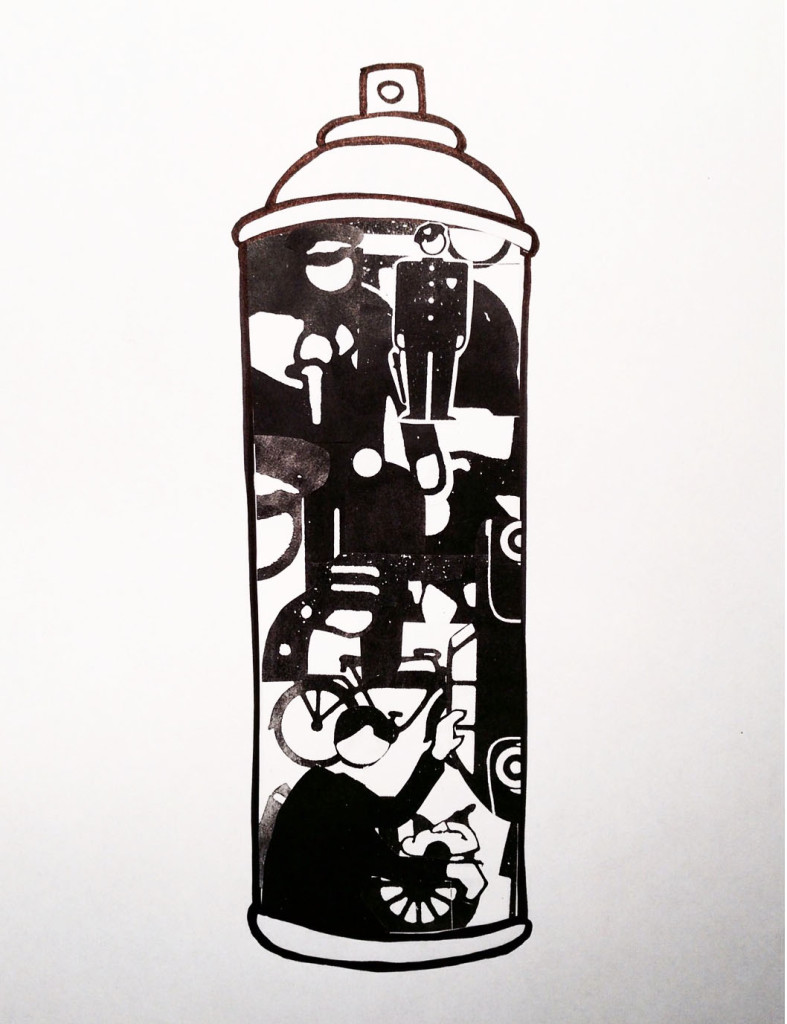 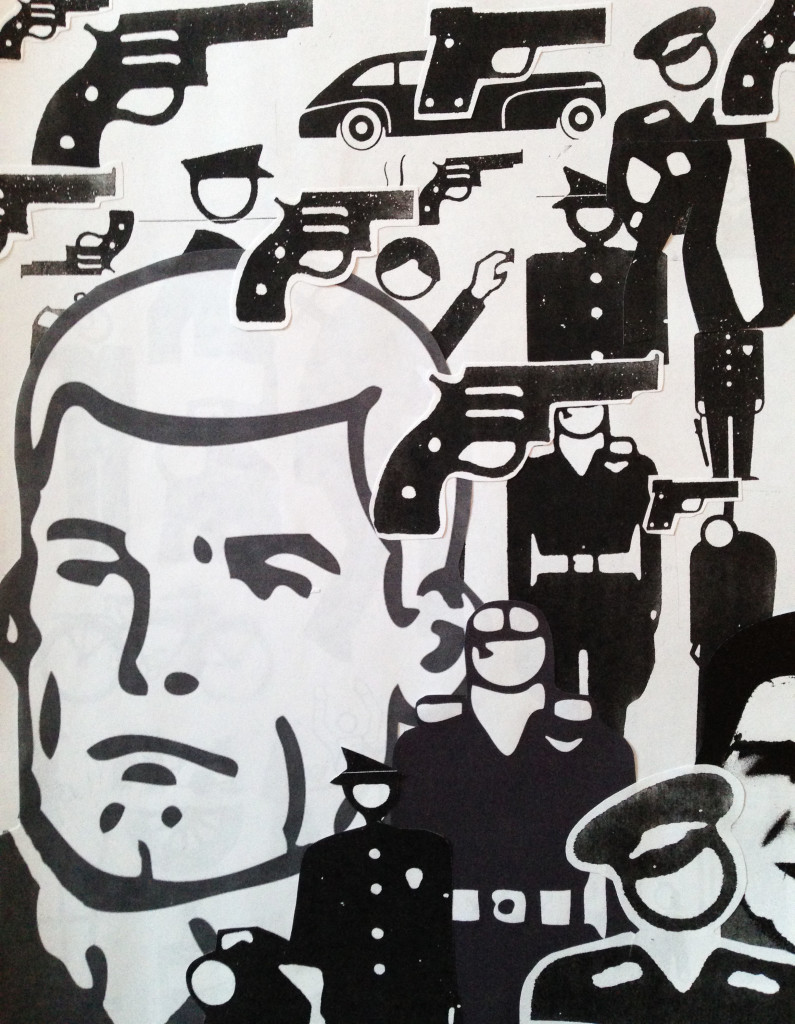 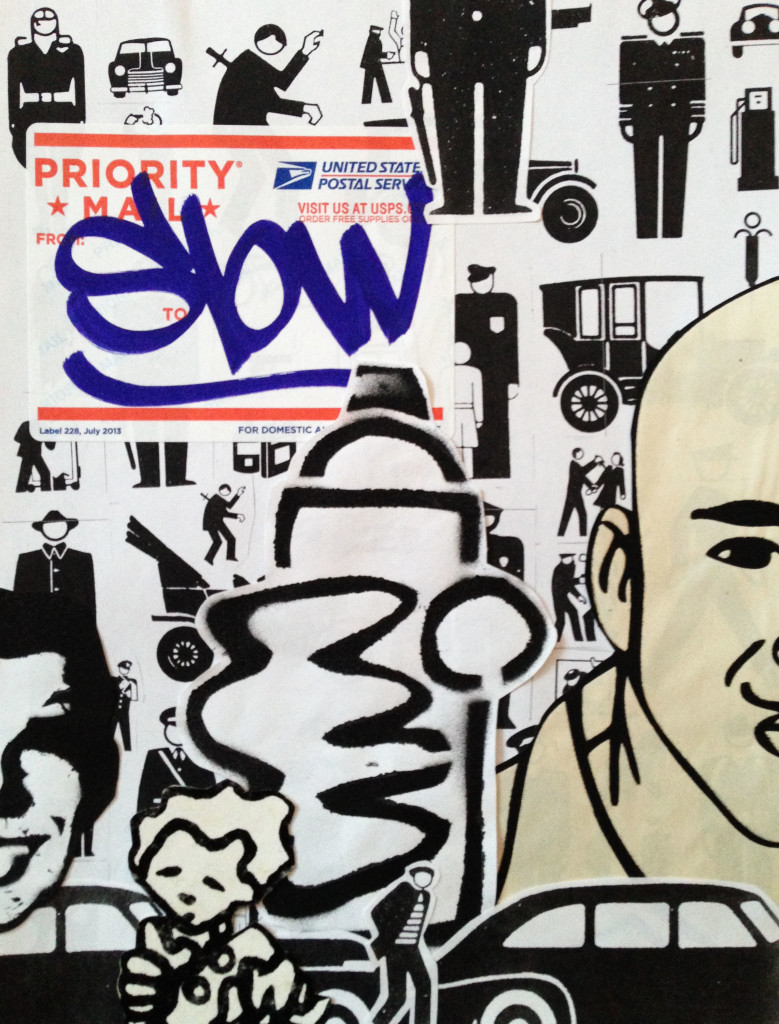 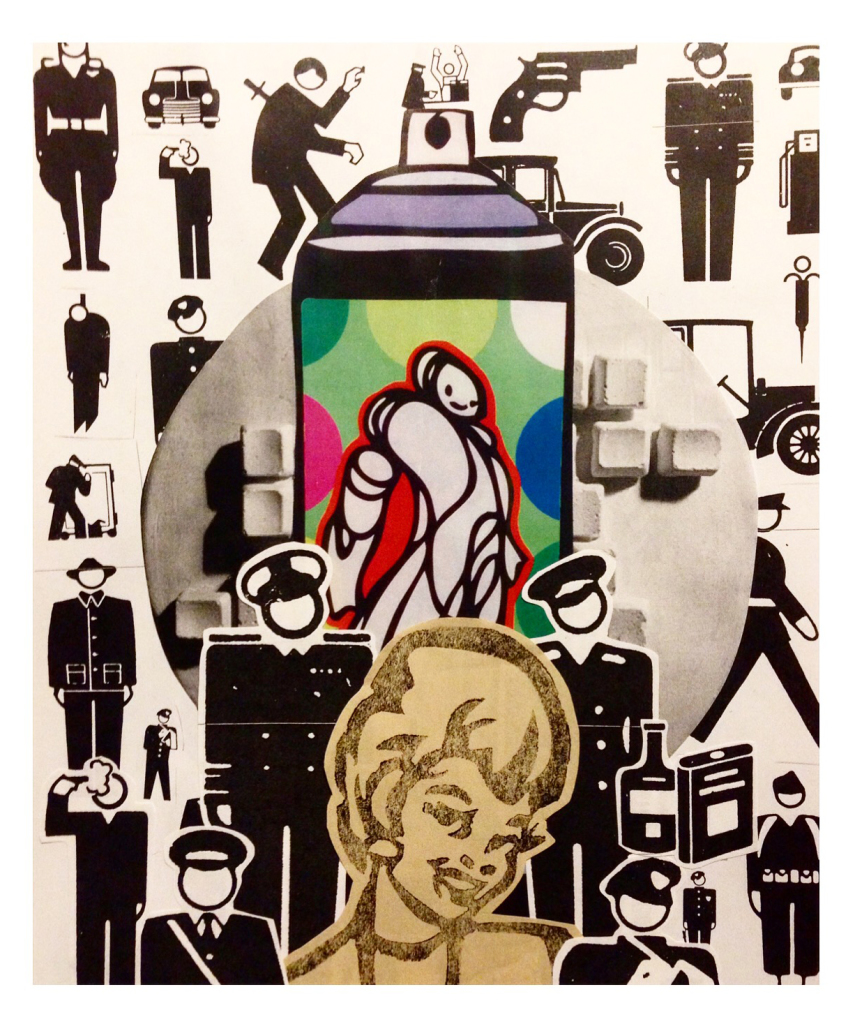 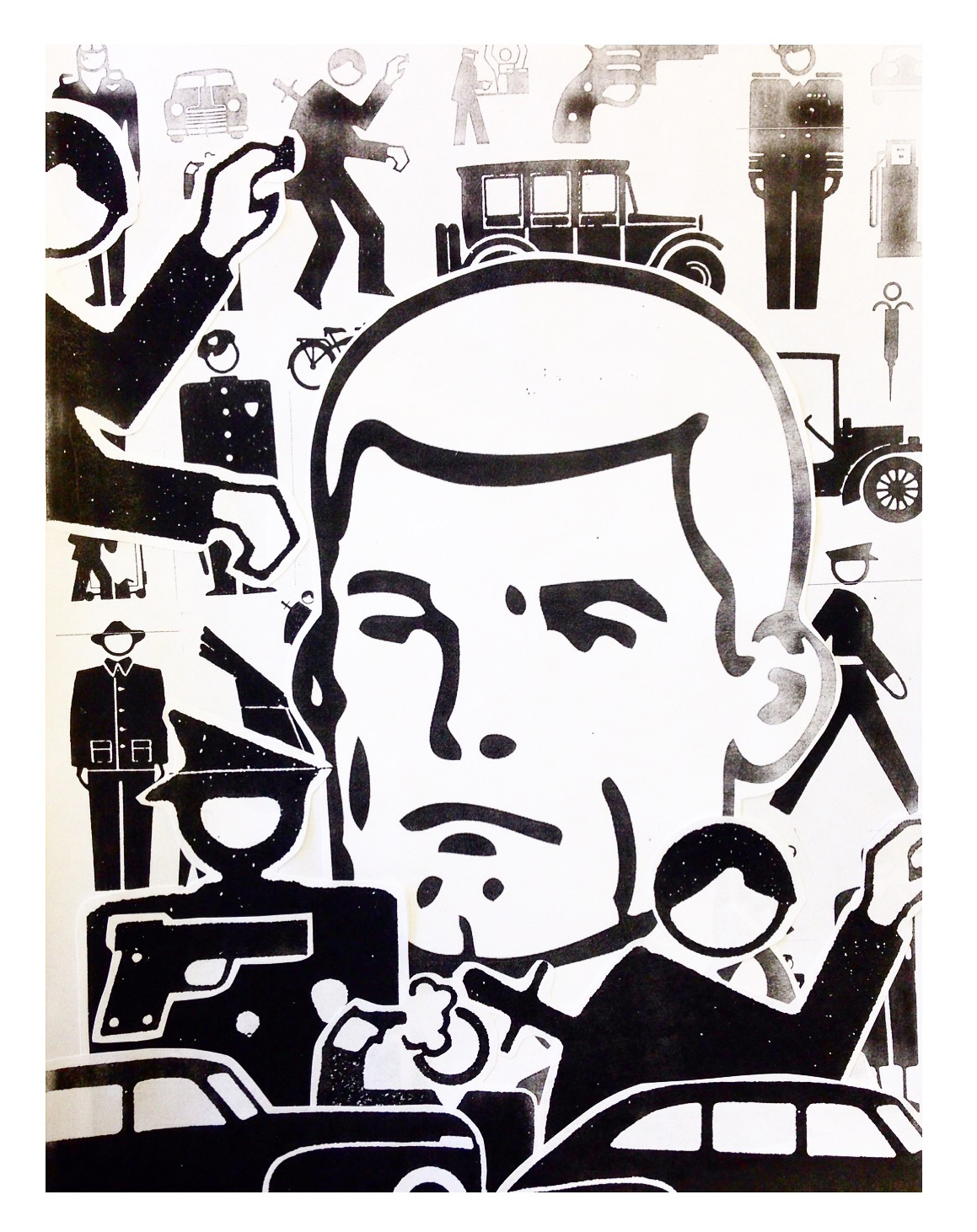 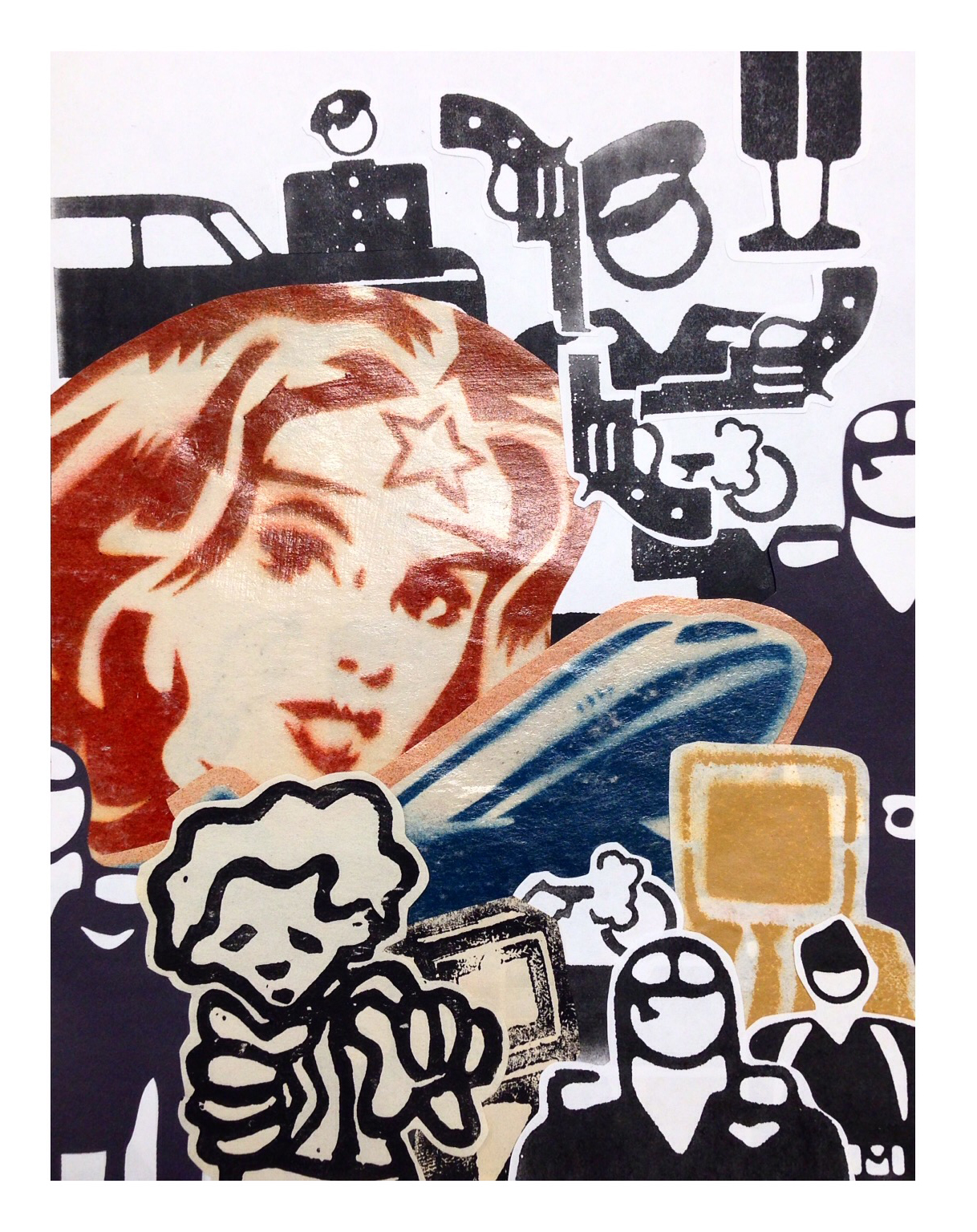 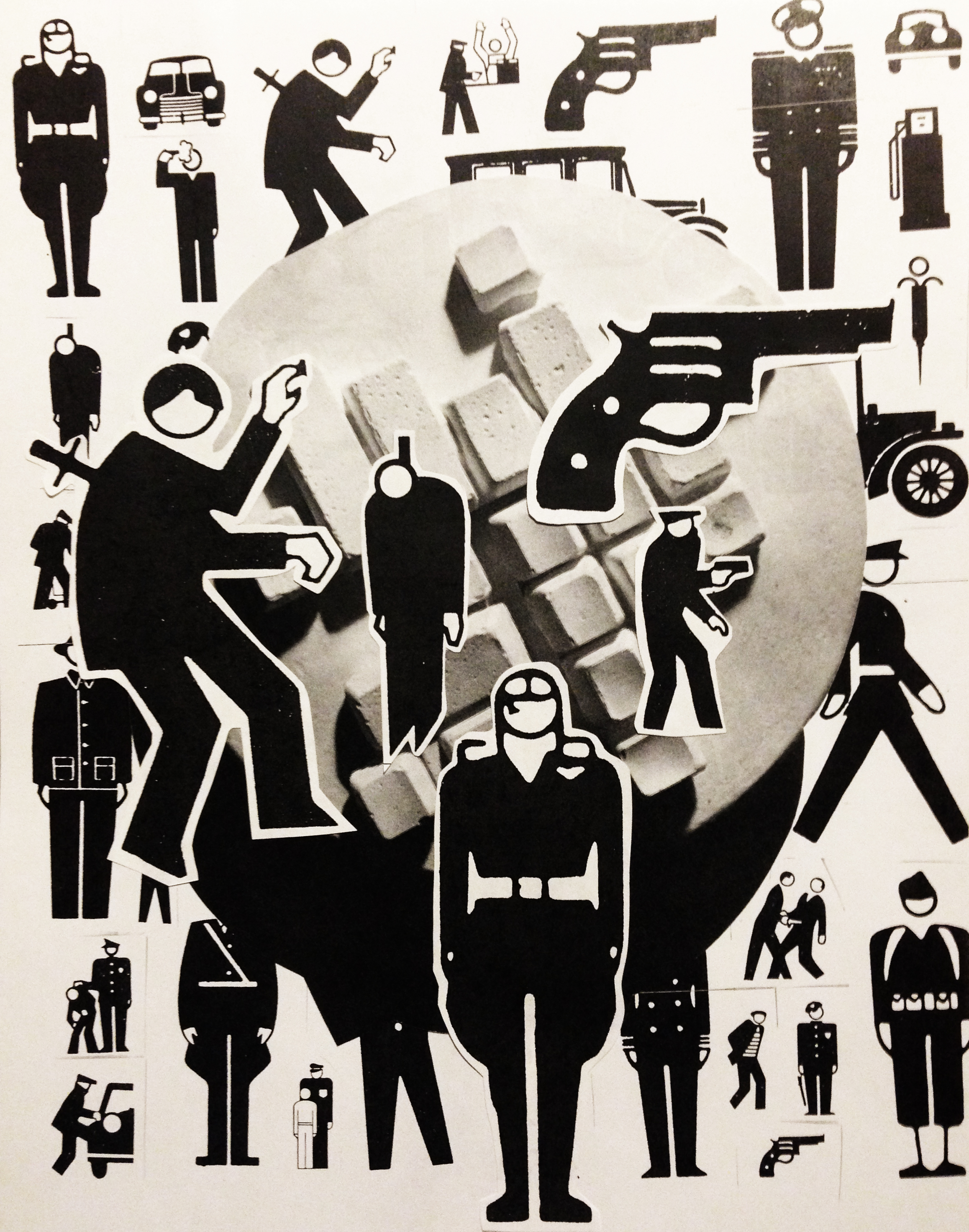 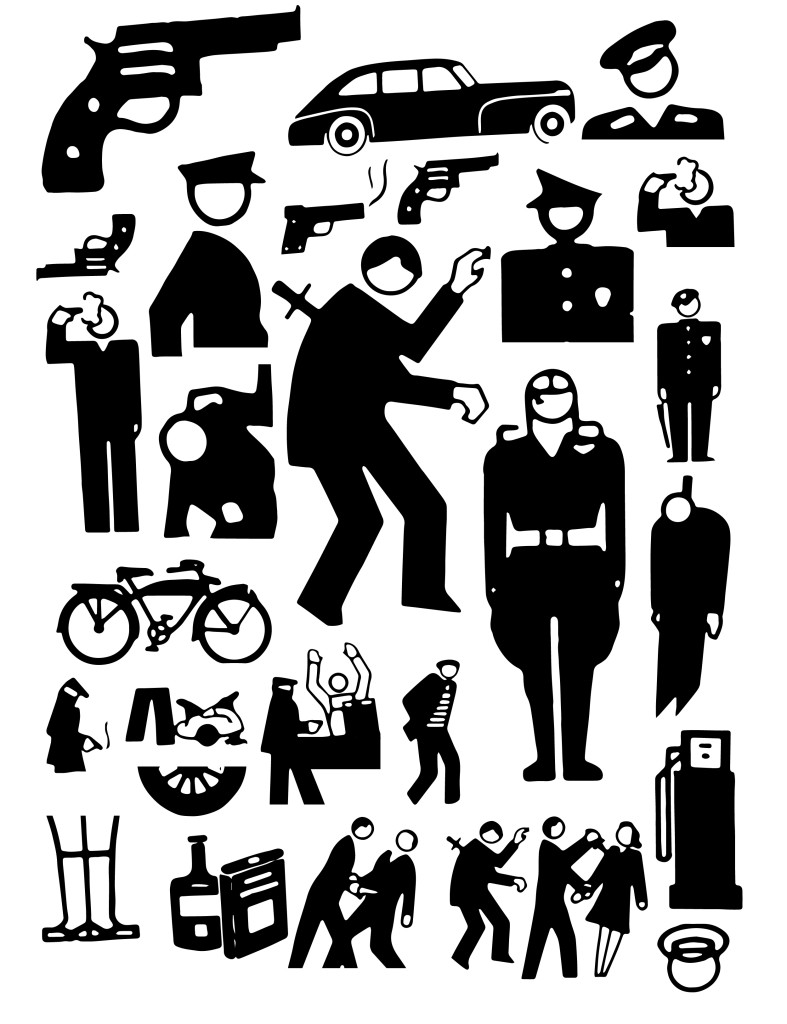 The last image above is the most significant. It is where all of the work above began. This is a re-arranged and remixed variation of several individual pictorial symbols from the “Crime” category. It was here that I found the inspiration and potential to work with the content. Shortly after I became inspired I began making drawings and cutting rubber linoleum for stamp based prints. Well, what else to do with all of the prints…GIF them! Don’t get me wrong, I love making static art as you can see above, but animating those pieces are even more fun!

Start your own series of manual to digital GIF narratives using pictorial symbols.

Step 1. – Decide on a theme, subject or category. A simple internet search for pictorial symbols will do the trick.

Step 2. – Download, scan, photocopy or re-draw the images that you want to work with.

Step 3. – Isolate the images and reproduce them. To make manual collage based works you will need many reproductions. I often make rubber linoleum stamps, stencils and silk screens to produce multiple images. But I also enjoy re-photographing the prints and photocopying them as well.

Step 4. – Cut out your images and begin to organize and compose them into static “pictures.” This means, create a series of static scenes and illustrations that communicate a story, situation, occurrence, action or fictional narrative. This is the fun part. What do you want to say through the use of the images? How many do you want to make? I suggest keeping the images at the same size because they will later be easier to photograph and or scan for animating. Glue down the images that you want to be static works of art. Rubber cement and regular glue sticks will work just fine for this.

Step 5. Using photoshop or other apps like VINE or Gimp to experiment with stop motion animation. By using individual prints that you have cut out, move and arrange thttps://www.ryanseslow.com/wHKeJhem as you take photos of each movement. Also, look into creating storyboards and stop motion animations online. There are tons of resources so get on this and share your discoveries.

Step 6. Choose a further method of output, capture and display. Where are you going to show your work? On your blog? Got a tumblr? Google+? I want to know.