Metrics of Time – A Reflection from 3D to JPEG 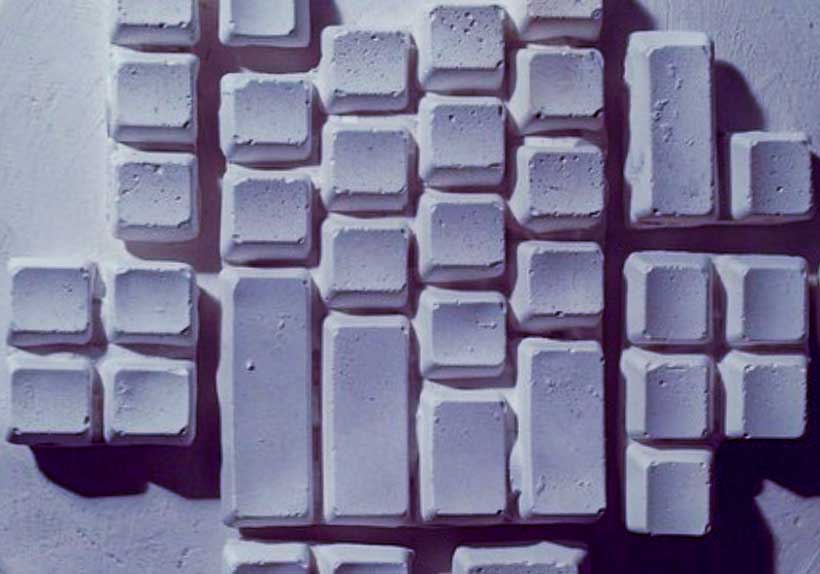 A Reflection from 3D to JPEG.

I have always been attracted to working with 3-dimensional objects and materials. Since Im a small child, “making objects” was a great way to express myself and exercise the imagination. As I reflect back (and keep that word “reflect” in mind), I always loved the idea of making hybrid objects. Mostly stacking and assembling things that seemed like they did not belong together. I was simply exploring form and the potentials of form. I loved it so much that I never stopped. I especially enjoyed exploring the subjective, the nature of materials and how they related to my understanding of “life”. We are pre-disposed and domesticated by the many many “objects and things” that we grow up with around us. All of which already have a specific name, title and function. We learn to call this “the objective reality”, where almost all things are representational. Until we intervene, if we do, it may be tricky to expand beyond it. For example, when you purchase and drink a bottle of water or a coffee from the local coffee shop, you quickly dispose of the empty “object” that you drank out of. You rarely stop to contemplate that the bottle or cup was simply a “form” first, and that the form has potential beyond its intended usage. Well, do you?

There is context here with the art-works below..

In the two pieces below I am using and applying the word “reflection” as a medium and a utility. This blog post itself, right now, here in November 2021 is a part of the art-work. “Reflection” in and of itself is a duration based task and action. It takes and requires “time” to reflect. The act of reflection is vast and rich in psychology. We can reflect upon something or someone via our thoughts for 1-2 seconds or we can reflect upon those same things for our entire lifetime.. The individual context is so specific to each person of course. We can also reflect by writing, which usually means “typing” now a days.. But alas, do we ever schedule an appointment with ourselves ahead of time to “reflect” on something, someone, a situation or a circumstance? Have you ever thought to do this yourself? When we reflect, is it possible to even retain and accurately relive the events, people or circumstances? Well, well now.. you may say no because we can only reflect on something that has “passed” and is no longer in the actual “now”. Or do we wish to believe our reflections as a story, experience, person or memory? Of course this too has context, especially for the dichotomies ranging from our great achievements to serious personal traumas, memorable birthday presents and or seemingly banal objects.. like a wall clock.. yes, a wall clock..

The two sculptures below are titled: “Metrics of Time” Version #1 & #2. Both artworks were created and completed in 2015. The medium is plaster (or known in some areas as “pottery plaster”) – which is a powder-like synthetic dust that turns from dust to a solid form when mixed with water as its catalyst and left to cure. I fell in love with making casts and molds somewhere around 1990 when I was a kid in High School. Mold making became even more interesting when I entered college (due to the super fun projects that we did) and it always stuck with me. The idea of being able to reproduce an existing object true to its original form (with out labels, logos and packaging) and with a variety of different casting materials was so attractive. Clean, smooth surfaced solid forms are beautiful! I frequently used plaster, cement, acrylic resin and water (that I would freeze into ice molds). Even more so, the ability to make a rare single edition mold positive or an army of multiple replicas was also so much artistic power (and I certainly made my share of multiples over the years!) At the time though, in those early years of mold making, I didn’t connect the super important role of photography to the works that were being generated. Especially works created with inexpensive and ephemeral materials like plaster. I was connecting the value of the art with the value of the materials. A big mistake! Plaster is cheap. Both in price and in its quality as a material as it will deteriorate, discolor, flake, diminish, chip and age poorly over time. But then again, this is also very very much like us humans. We are equally ephemeral. Time is also equally ephemeral. Especially in context to the awareness level of the living person that contemplates it. These pieces below share both the conscious passing of time and the ephemerality of all things physical in this biological life. All of this information above was nestled into an “object” that communicates “time”.. 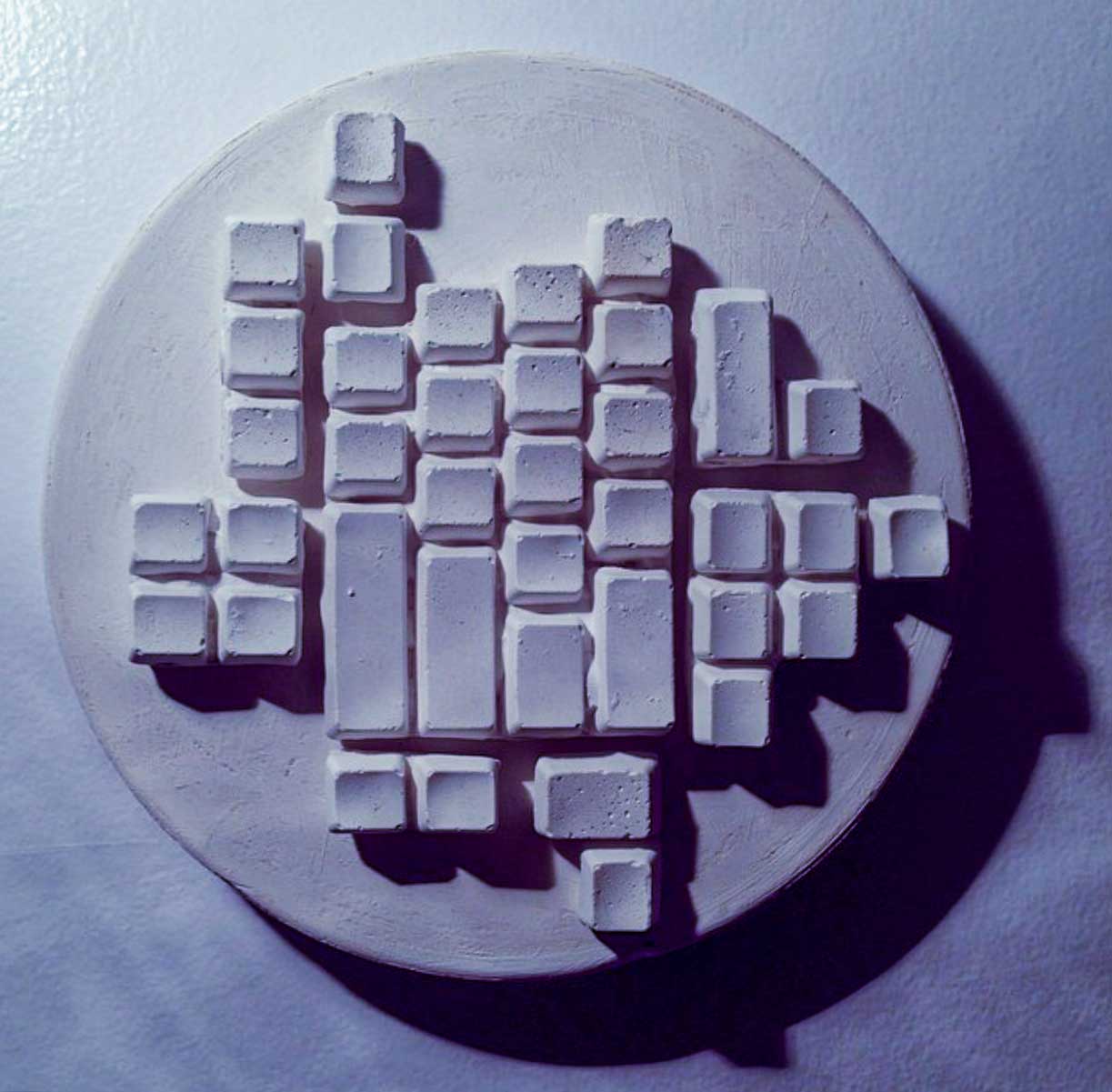 I destroyed both of these “physical” sculptures shortly after I created them in 2015. My intention was to complete the sculptures, photo document them and show them publicly as printed images nicely framed and mounted. Much like one would expect to see with traditional photography in an art gallery. But that never happened. Each time that I mocked up the idea, it just did not sit right with me aesthetically or emotionally. My bodies energy instantly changed when I placed the “images” of the sculptures up and onto the wall. (I had printed them myself with my printer in my studio at the time.) Busy with otherness, I decided to put the project on the back burner.. Fast forward to November 2021, where inventions like the blockchain, crypto-currencies and the minting, selling, trading and collecting of digital goods have become a huge fast growing market for artists and rare art works. Single edition digital art works have become extremely desirable in a format that we all know so well as both artists and regular Internet users, the JPEG. The JPEG, yet another communicator of time.

Back to the context. The sculptures were intentionally mounted and hung on the wall. They are inspired by and mimic a standard wall clock. It is an object that has always captured my attention. Im talking about the old fashioned one’s from the 1970’s that lingered around all public buildings and space for many years longer than they should have. As a child I thought they had magic powers that only adults could access and understand. I waited with great patience to also access that sorcery! Most of us are introduced to a wall “clock” via our homes and elementary school experiences. We always looked up at the clock to see when our classes would begin and end, day in and day out. As a kid, I could not wait for the school day to end, and now as a professor for 19 years, Im holding tightly to every minute of class hoping the time flows slowly. I look up at the clock and frown! At home we always looked up at the clock to see when it was time for dinner, time for a bath, time for bed and time for … fill in the blank.. Regardless of all of this, the numbers on those old clocks stayed static as they hugged the circular contour line of the shapes form. The circle, a perfect metaphor for the cyclical aspect of this life. Round and round we go. The clock’s two arms, one short and one long, move in unison with their tireless friend, the non-static seconds arm. Even when things finally began to be produced, embraced and displayed digitally in the “time” telling gadget industry, I stayed fixed on the old clock as a metaphoric object of transcendence, evolution and self-transformation. 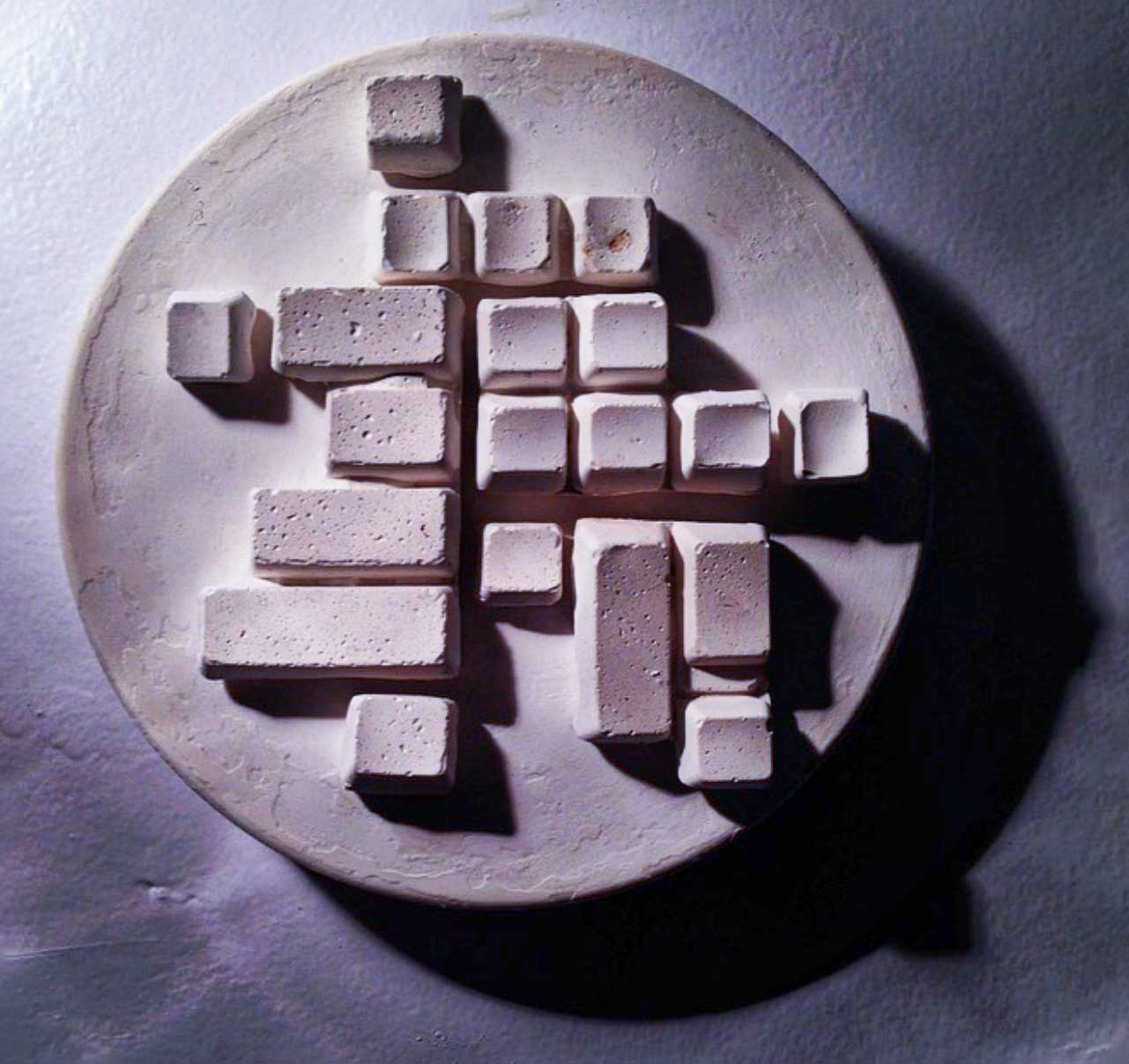 Wait a second, what am I looking at here above? Both of the original cast pieces above were made and assembled from cast plaster fragments. To achieve the form of the old wall clocks that I describe, I used a plastic bucket that resembled the same diameter of the clocks. I filled it up about 1.5 inches and watched the plaster expand another 1/2 inch as it normally does. I let it cure and released the mold. Plaster rejects plastic once it is dry, making the release easy and seamless. Have you recognized what the grid like forms are that rest securely on top of the circular base form? They are keys from an old keyboard that I used between the years 2004 – 2010. Yes. I made a full 1-part mold of the old keyboard using a silicone  / polyurethane rubber mold making kit. I made the mold’s layers very thick so that it would be durable enough to hold any kind of volume that was poured into it as it cured. Much like my old experimenting days in undergraduate college, I made several casts of that old keyboard in plaster, cement, acrylic resin and frozen ice molds that melted away as they should.. In this case, when I poured the plaster into the mold I left each of the key areas shallow enough so that each key would easily be released individually. Once they were dry I arranged them into the two compositions that you see above. They were mounted down with epoxy to hold them in place. We can see two slightly different patterns in the alignment of the keys suggesting to the viewer an intentional meaning or functionality of the object as a whole. Perhaps suggesting that this object is an old relic from the future or the past of a parallel world.. either way, the keys are now functionless..

The context of the keyboard as a metric of time is also a metaphor. The act and action of “typing” has several functions and purposes. It falls into yet another dichotomy that ranges from one’s super personal intentional uses to the mundane and banal tasks we do day in and day out, but it still equates to a “thought to touch form of communication.” Our entire lifetime here on this planet is co-dependent on how we use, give and receive communication. All forms of communication take time.. many of us take it for granted. Two static objects were created to express and communicate an understanding of “time.” The objects were destroyed by its creator only to discover that they transform their energy into another form of “how” it can continue to communicate and transcend itself. The creation began from formless thought energy and into the generating of a 3-dimensional tangible form, only to be destroyed and re-introduced as a 2-dimensional form in the format of an image, the image has been placed online and agreed to be converted into hypertext and placed onto a web server..

The 2-dimensional images are now asking to be minted on the blockchain and re-introduced in the meta-verse as yet another form.