NEWYAWK / A new page on the blog

NEWYAWK Tee-Shirts© is a brand and logo created by visual artist Ryan Seslow.

The NEWYAWK brand was born and evolves in New York. 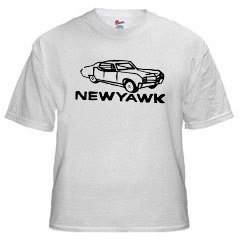 Bio:: New Yorkers are well known for the twist that they put on the pronunciation of words. As a kid I always took notice to how my relatives spoke. Coming from a variety of European back rounds, it was fun to notice how the cultural mixture of NYC and Brooklyn would synthesize into the spoken English language. Walk was WAAWK, Talk was TAAWK, Coffee was CAAWWFEE, Three was TREE, and so many more, I could go on and on. As I grew older I noticed it wasn’t only my family that was speaking this dialect, it was MOST New Yorkers. I loved it. Everyone who I crossed paths with became a character in my world. During my teens I discovered graffiti and stencil related street art. I feel in love with both. I looked for a way to create a unique tag that could represent the energy and twist that New Yorkers put so well into their stories of all things New York. I didn’t want the tag line to be selfish, but more of a selfless form of expression, a way to include all of the people who have so greatly influenced and shaped my perception of New York and its people. NEWYAWK was born in the early 1990’s as a cardboard stencil cut out that read as one word in lower case letters. It soon evolved into a hand painted image for screen printing. Silk screen printmaking redefined my process and eventually the classic car image was added to the tag line. A logo and brand was born. This is when I discovered that multiples could easily be created one by one so that they would not loose the hand painted touch. I believe this is what gives the classic tee its charm. For many years the image played a role in my paintings, and then eventually onto t-shirts. I realized how I could share my feelings and appreciation with friends by printing them onto a wearable garment. What better garment than a tee-shirt? The tee-shirts took on a life of their own as people began requesting how and where they could get one, hence the word of mouth grass root process. Creating NEWYAWK tee-shirts and prints is 100% fun. 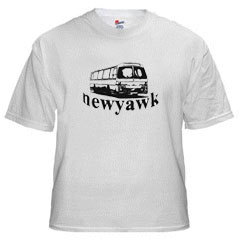