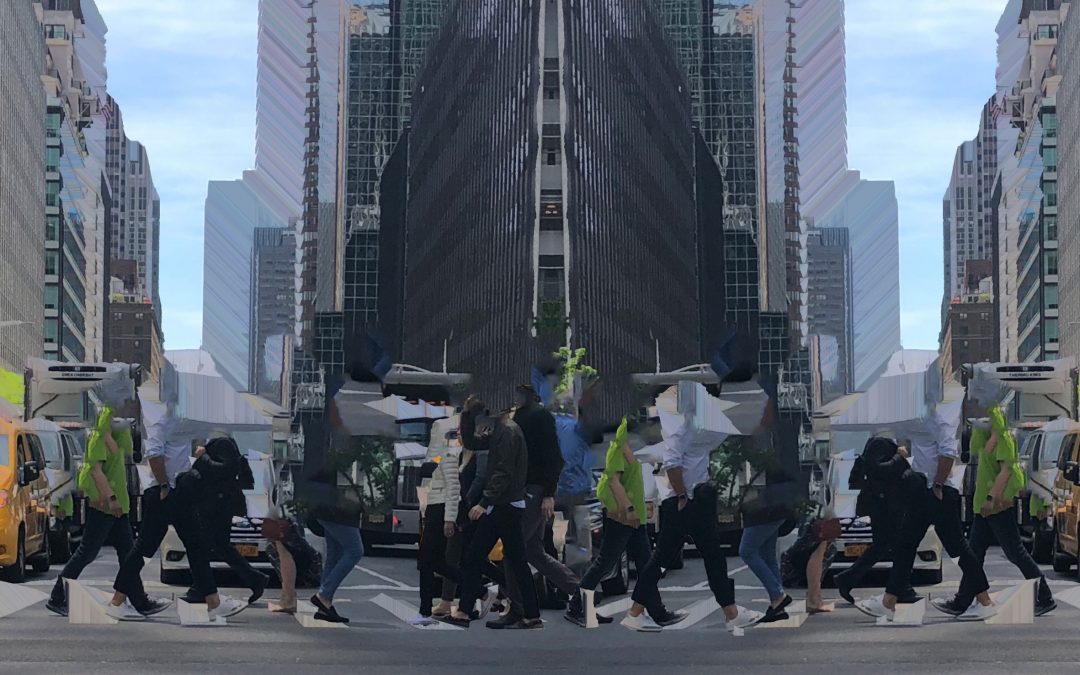 I love the immediacy of taking photos with my iPhone and using them directly as inspiration for new digital art works. The ability to shoot, capture and apply one’s own visual references in immediacy continues to fuel my desires as a media artist. In my latest new media project I have been playing with the idea of anonymity and how it can be expressed from the perspective of being deaf and hard of hearing in a large city. In this case NYC, where I spend a lot of my time. Even though one may find themselves surrounded by thousands of other people at all times constantly in motion, you may not find one familiar face in the sea of human beings. This of course does not mean that communication is not being made and or exercised. Communication comes in a different ways. Many many ways. Some of which can be totally taken for granted. Are you a hearing person with normal hearing? Perhaps on your next visit to NYC, LA or Chicago wear a pair of sound blocking earphones and walk through the busiest sections of the city through the eyes of the soundless. What new sensations will you take notice to? How will all things visual enhance and or become more pronounced? Where will your visual focus be with the removal of sound?

As a deaf and hard of hearing person I live between the world of battery operated digital synthetic amplified sound and no sound at all. Even when there is sound via hearing aids, in a big city like NYC, for me its mostly distortion and the over amplification of the things I would rather not hear, like sirens, and multiple other things competing in the same space. I have the choice to remove my hearing aids and often do so in these environments. To this day I still find it utterly perplexing that my brain functions this way. I often opt out of wearing hearing aids in certain areas to avoid distorted noises and the limitations of what hearing aids are supposed to do. I don’t mind experiencing my world soundless. Its not a limitation in my eyes, nor is it a “disability” like many refer to it as. When the void of sound is present another sense kicks in. I become acutely attuned to the vibration of people, objects and things. I can also activate this when I wear hearing aids but its a little harder to do and maintain. Especially when multiple synthetic sounds and vibrations are competing with each other while my brain is trying to convert them into comprehensible meaning. How does this all work? Im both fascinated, perplexed and inspired to attempt to explain it all. 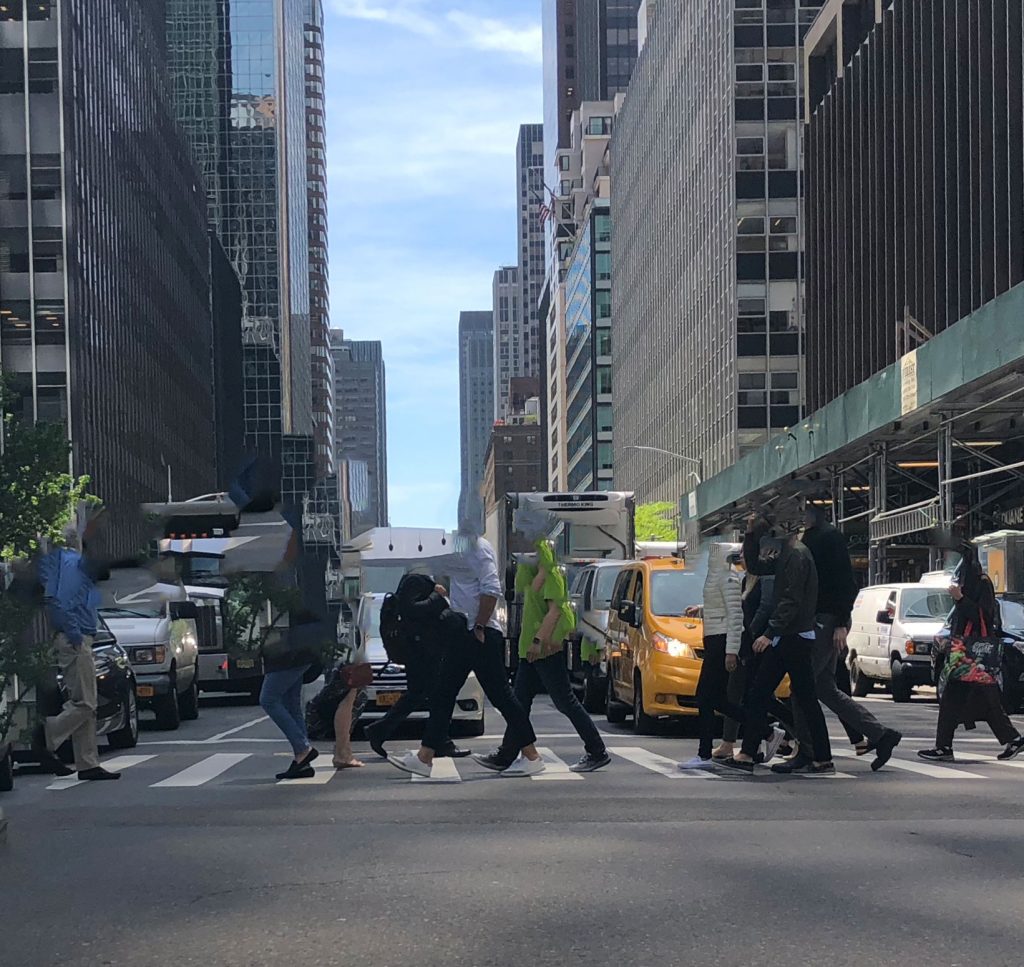 The first piece in the series came from this photo I took while crossing the street in mid-town on the east side. Even when wearing hearing aids I miss a ton of sounds and words when trying to communicate in noisy environments, especially the city. I was never able to “overhear” our follow the conversations of other people anywhere. Hearing people are exposed to this all the time, especially in public space. You kind of have no choice to a degree. I often wonder what that is like? I could only read lips to a degree and watch the facial expressions and body language create patters of repetition. Over time this became both a visual language and an emotional one as well in and of itself. In a public space like NYC it makes what I witness visually an ongoing anonymous experience. The works below are manipulations and extensions that are derived from one single experience and one single image yet it represents so many of the others like it.. This is a metaphor and an expression of how this effects me on a sensory level. Its kind of like a paused, freeze-framed moment of ceaseless motion where some parts stop and some continue to move. I find beauty in these moments and can retain them in my mind’s eye. 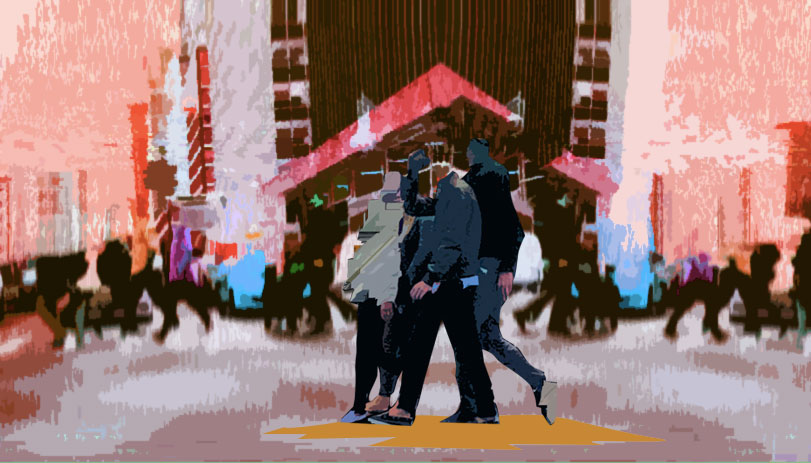 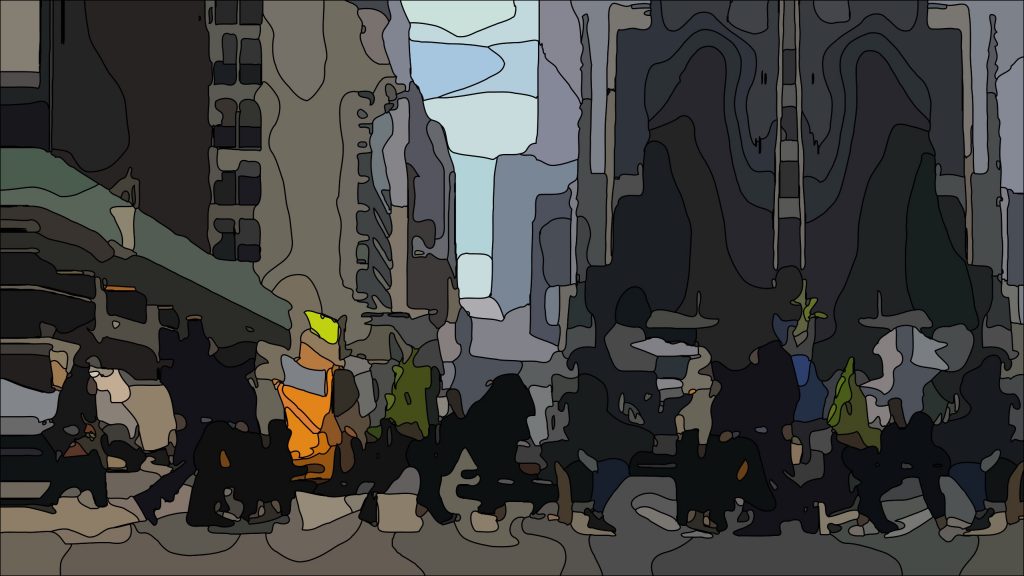 The static frames above inspired the second phase of the project’s development, making videos. The videos below are my first attempts to bring together the ceaseless motion of the static images and put them into actual motion. It seeded natural to do this over time. Visual motion is experienced as a whole frame rather than the moving of the legs as the people walk. How does this effect help you engage or disengage visually? Each video is short and unlike GIF files these do not loop over and over, they have a beginning and an end.

I also began to think about the environment itself. Meaning, what if the architecture also had a point of view on how they communicated with those thousands upon thousands of people that anonymously interact with them. A simple reversal of roles. How is it that the largest of objects can be visually ignored and unnoticed. How we place context on this kind of communication plays a role, but this role is mostly absent. I find a connection between buildings and the body. Both are vessels and containers. The contexts are both metaphors and literal / obvious. I get a great sense of duality from this as an idea and it has pushed me to want to dig deeper into the concept. This is the first series of works below using just one image to suggest the morphing of sentiments and feelings that are mirrored between the public and its architecture. Thank you for visiting. This blog post is a first draft into the further development of this new body of works. Revisions are being made and I intend to show and display the works beyond the Internet soon. 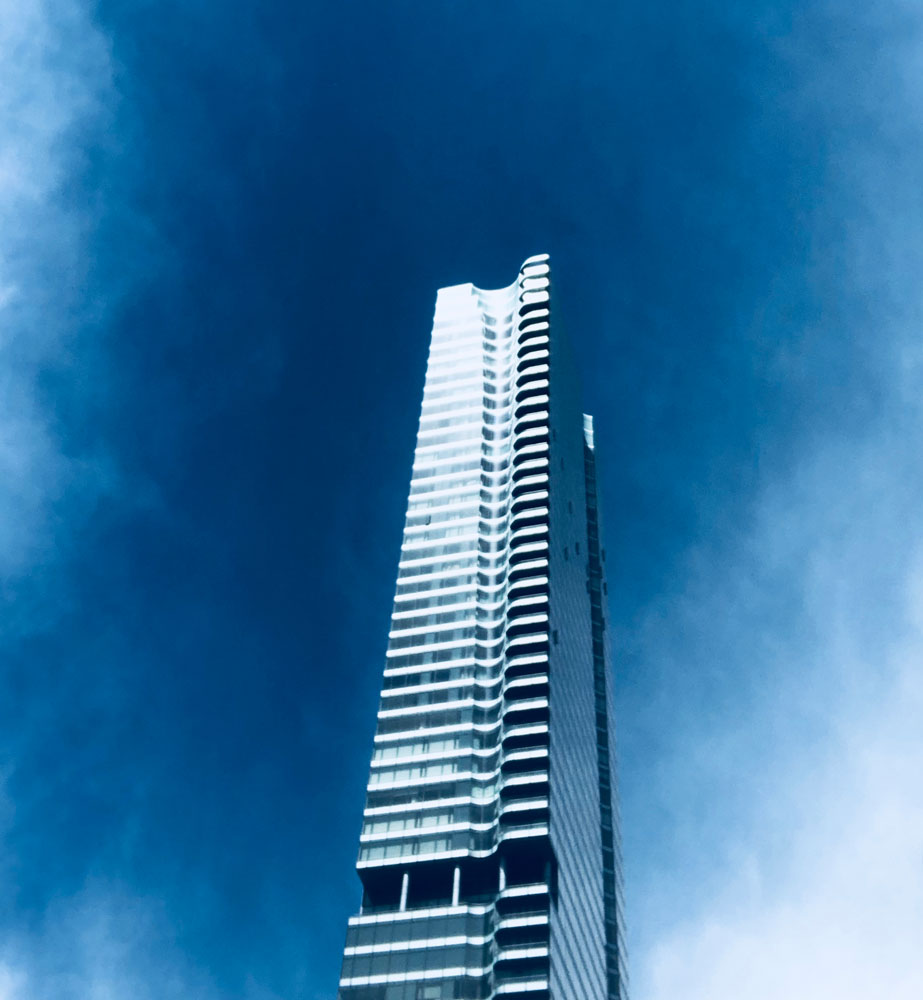 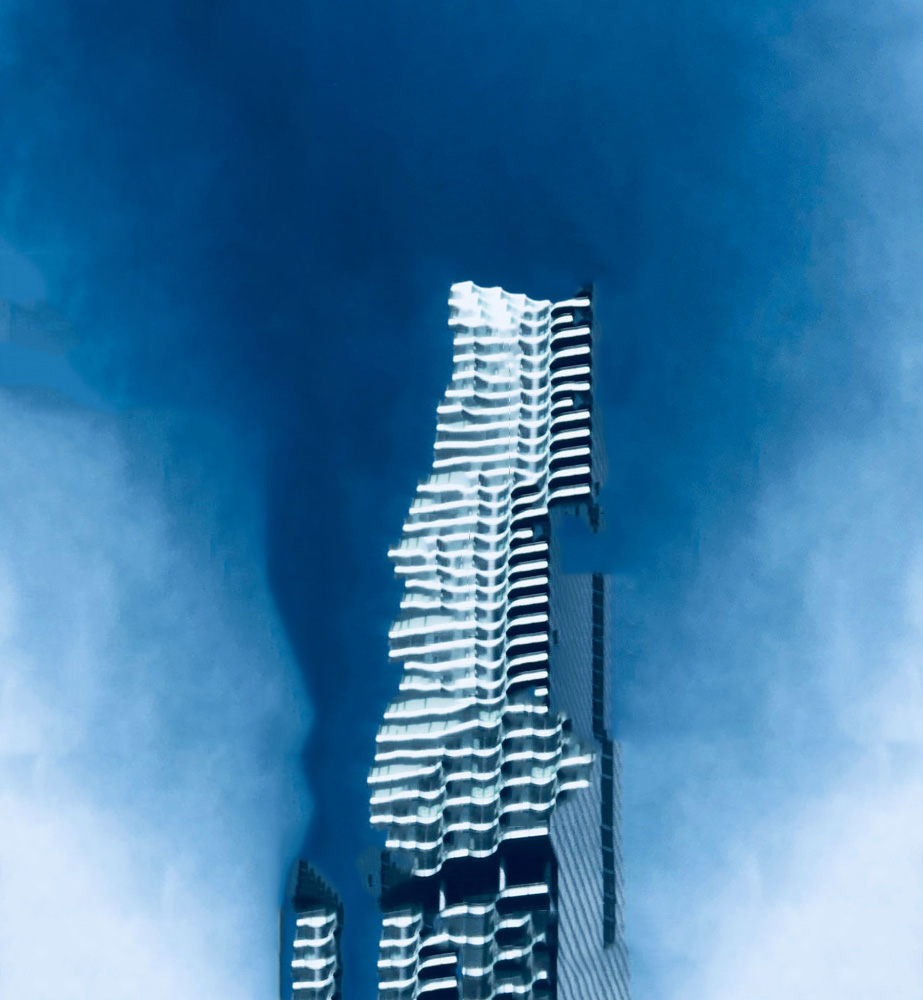 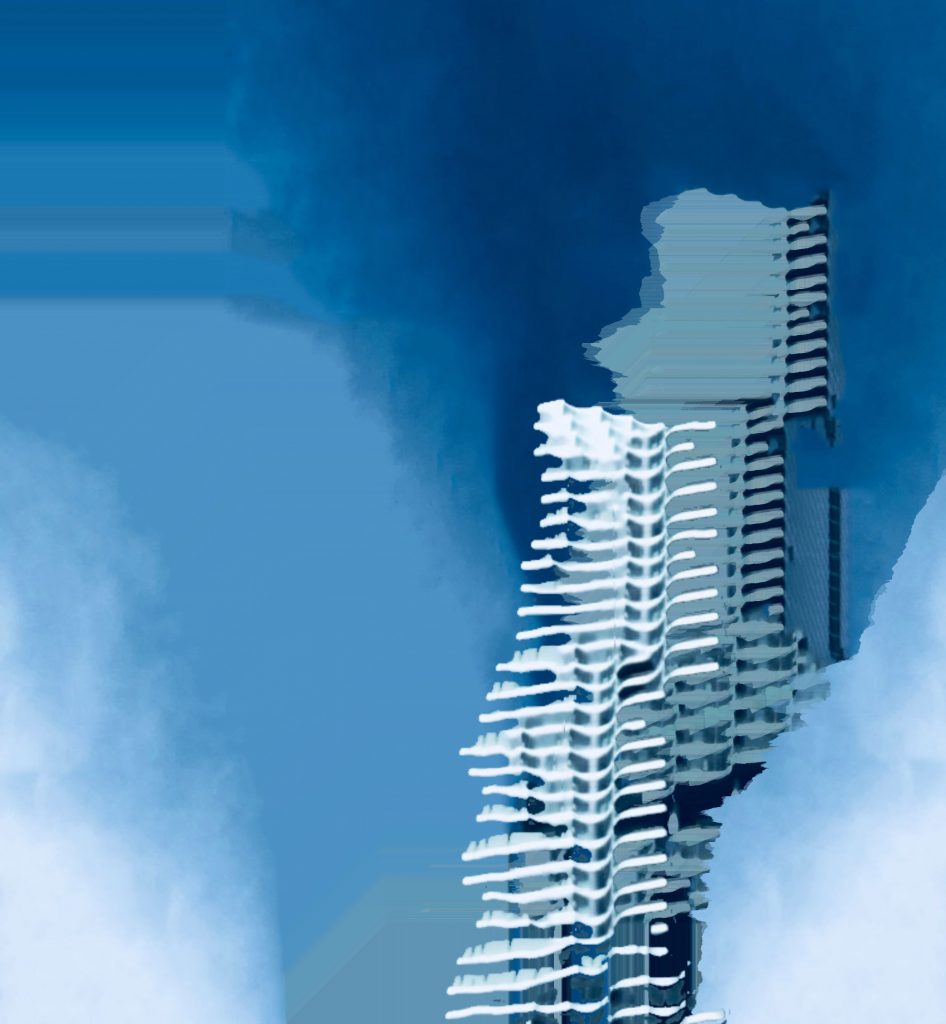 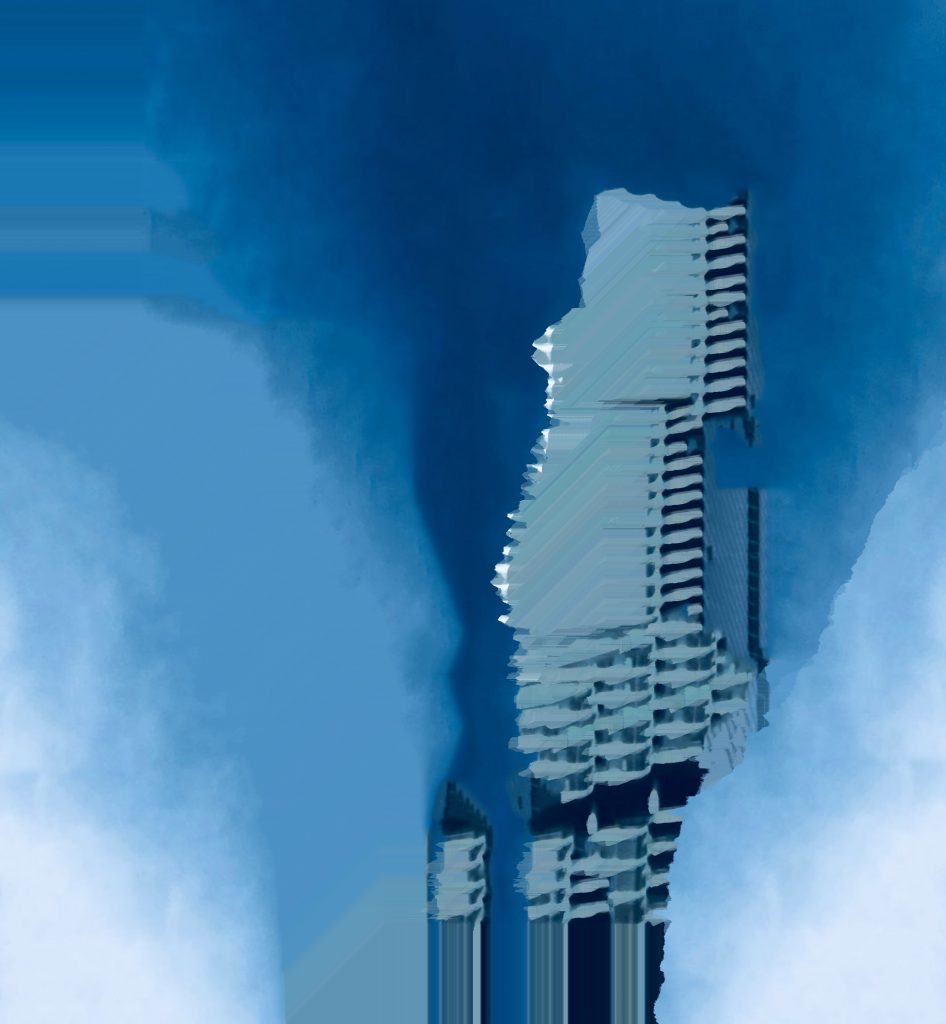