The History & Emergence of Street Art & Graffiti will be taught in NY this summer at Long Island University, Post Campus,  Brookville, NY. The one week intensive workshop will run from July 9th-13th. Monday-Friday 9am-6pm. Course number, ART597, 3 Credits. Students can register through the department of Fine Arts located in the sculpture building or contact the university directly through the registrars office.

Check out the press release from LIU here:: http://bit.ly/L1cSAo

This summer I am happy to announce that our line up of Guest Artists & Speakers include:: 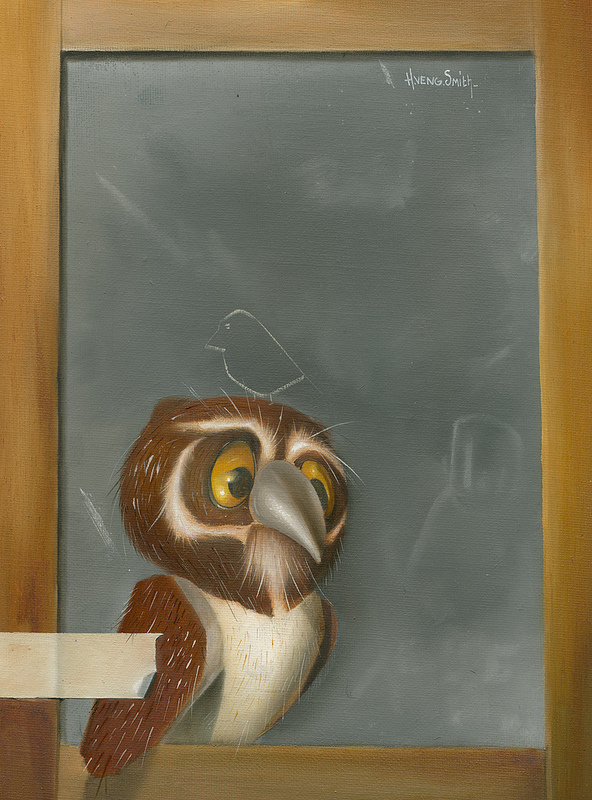 Born on Staten Island in 1981, I began studying painting as a young kid at a local art league. Since then, painting has remained an integral part of my life. With my work, I look to capture the feel of something made long ago, be it characters with old-fashioned appearances or objects with Old World designs. I depict ideas in my paintings in a representational and faithful manner, yet convey them visually with a whimsical touch. Borrowing from techniques of the Northern Renaissance, I like to mix my own pigments with oil and paint by building up multiple layers. My thought process for painting, however, is less traditional and very much informed by my background in street art. I aim to make surreal impressions, with characters whose square heads are on the one hand very unreal, yet whose facial features are eerily familiar. I enjoy depicting scenes showing the viewer fictitious landscapes of an Old World interspersed with contemporary qualities. Nature also plays an important role in my work. I show animals in a more traditional manner, painting them with realistic colors and textures. Often I’ll couple animals with imaginary devices that they control. Whether on a panel in the studio or on a wall in a city, through my work I try to convey a playful world of mixed inspirations. 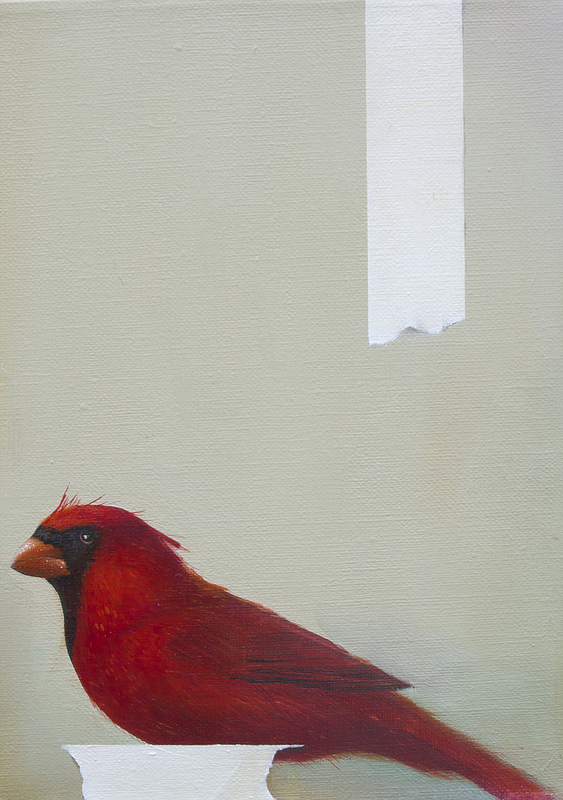 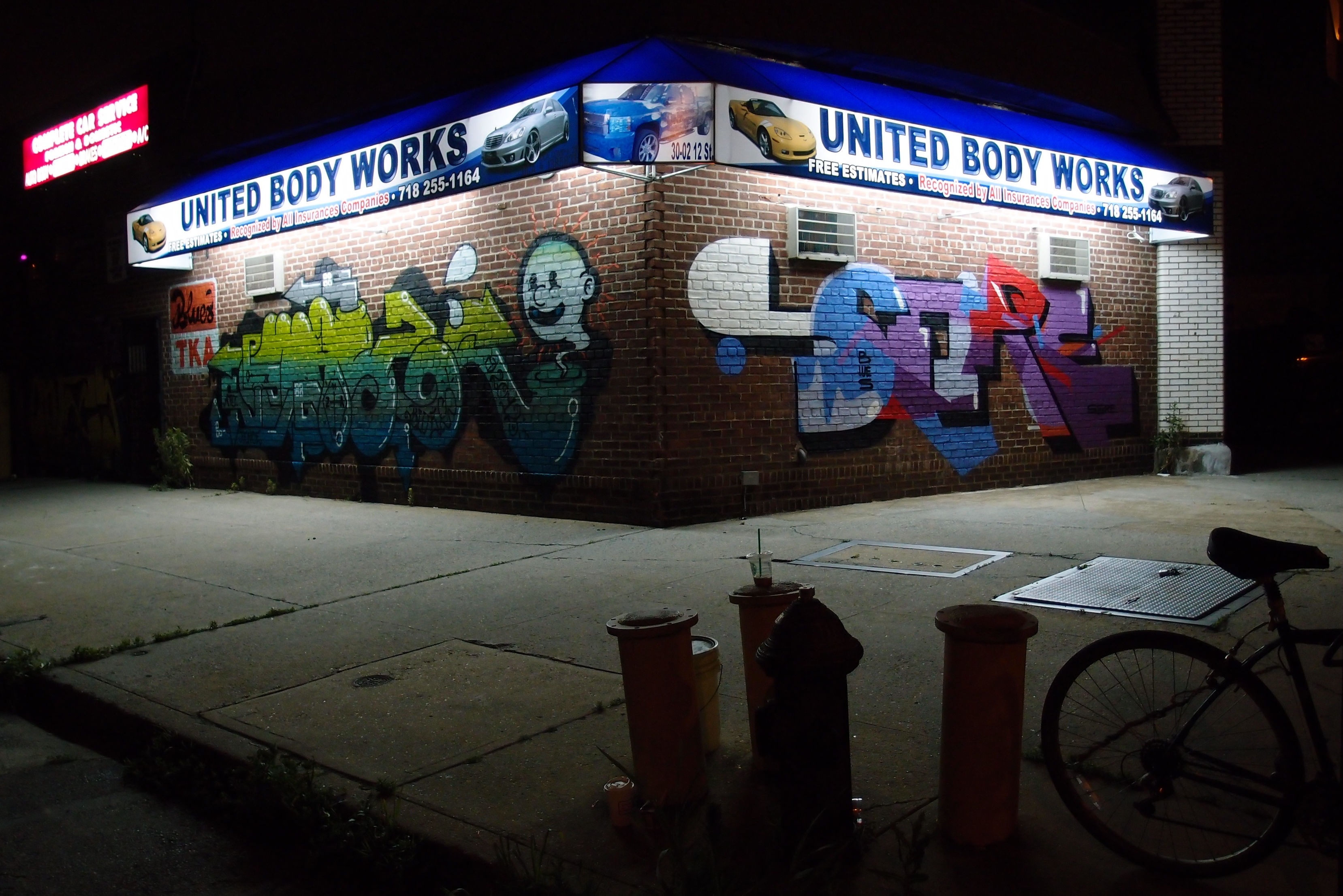 Luna Park is a Brooklyn-based street art and graffiti enthusiast, photographer and curator. She is co-founder of and regular contributor to The Street Spot blog. Since 2005, she has spent her free time exploring NYC’s decaying, post-industrial fringes in search of beauty in unexpected locations. She is passionate about urban art and supportive of all creative endeavors to redefine public space. Her photographs have been exhibited in New York and Los Angeles and have been featured in leading urban art books, including several artists’ monographs and the upcoming Graffiti 365. Together with Billi Kid, she co-curated Eames Inspiration in 2010 and The Great Outdoors in 2009. In 2011, she presented her observations on street art at the New York Public Library.
http://www.thestreetspot.com 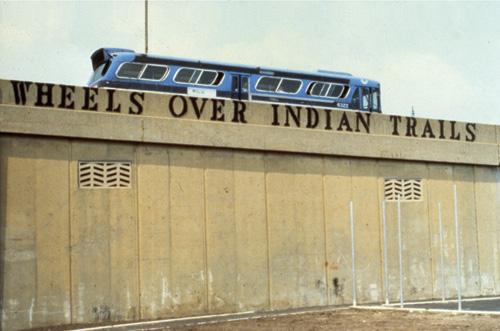 In the 70s, John Fekner was ‘anonymously known’ for over three hundred environmental/conceptual works consisting of dates, words, and symbols spray painted throughout the five boroughs of New York. The “Warning Signs” project focused on pointing out hazardous conditions that dominated New York City and its environs in the 1970s. In the spring of 1977, Fekner created word-signs using hand cut cardboard stencils and spray paint. He began a relentless crusade concerned with social and environmental issues. Starting in the industrial streets of Queens and the East River bridges, and later on to the South Bronx in 1980, his messages were seen in areas that were desperately in need of construction, demolition or reconstruction. By labeling structures and emphasizing problems, the objective was to call attention to the accumulated squalor by urging city officials, agencies and local communities to be more responsible and take action. 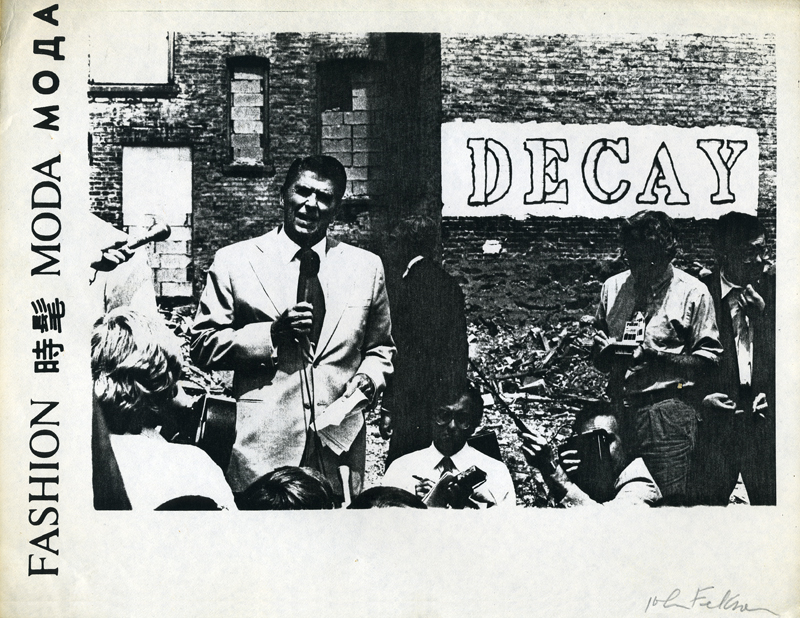 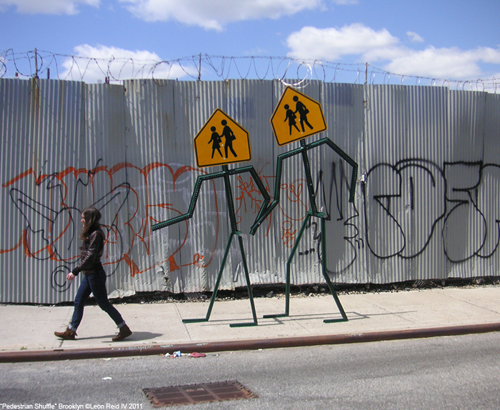 Born: Richmond, VA 1979,Education: BFA Pratt Institute ’02. MA Central St Martin’s ’04, Lives/works: Brooklyn, NY. Listed as one of the “60 Innovators Shaping Our Creative Future” by Thames & Hudson, Leon Reid IV has been on the edge of public art for over 17 years. He grew up as a traditional graffiti writer (a.k.a VERBS) and quickly developed a knack for unconventional practices such as painting street signs and installing them during daylight disguised as a construction worker. His experiments in graffiti lead him to move beyond the genre and pursue site-specific installations under the pen-name Darius Jones. Reid is one of the few artists responsible for introducing sculpture into the language of street-art, his techniques of installation combined with his humorous and romantic themes have made a sizable impact on urban artists of his generation. He lives and works in Brooklyn, NY. 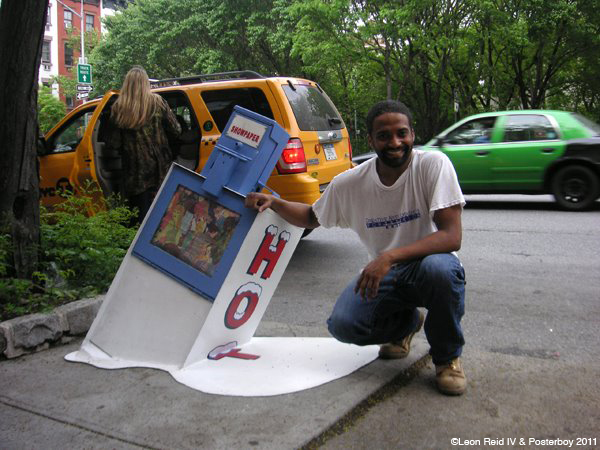 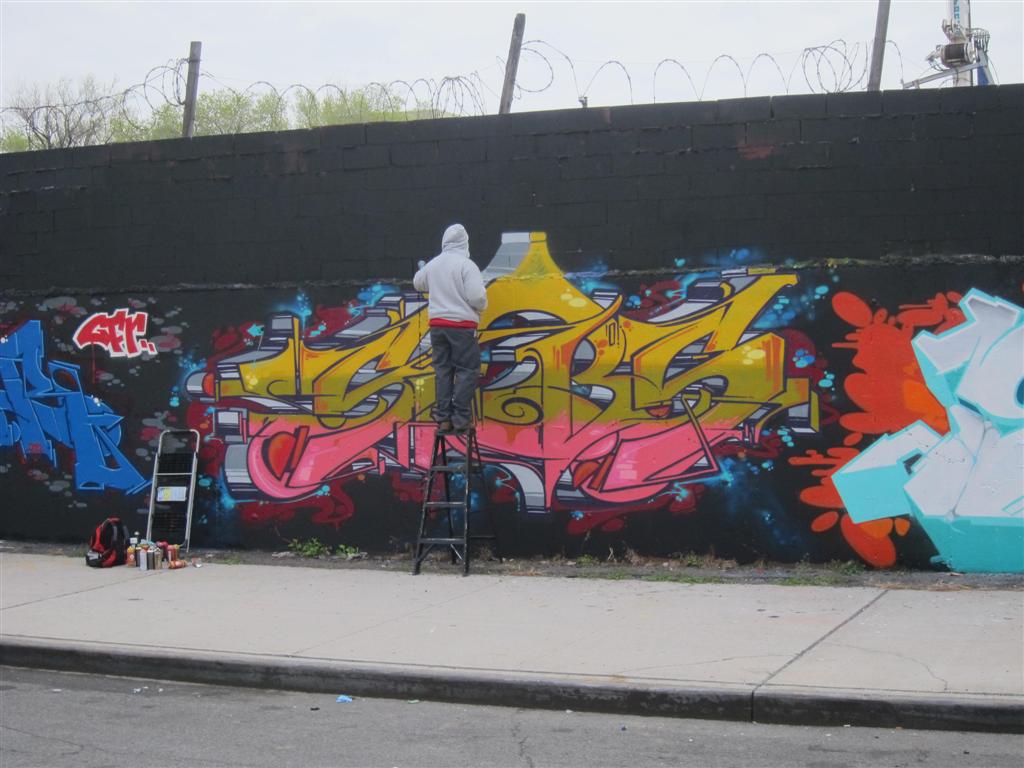 Was born and raised in Bushwick, Brooklyn in the early 1990′s. Sebs got into graffiti at the age of 12 through exposure from other neighborhood kids.  He got into trouble and quickly moved out of Brooklyn with his family. The circumstances  then lead him to pursue art as a career.  He learned how to airbrush, watercolor, oil paint and tattoo. Sebs currently holds a NY State K-12 art education license.  He continues to passionately produce graffiti art and exhibit in group shows. Sebs is currently creating a variety of works that capture his interest, and overall production enjoyment. Sebs is also a working tattoo artist. 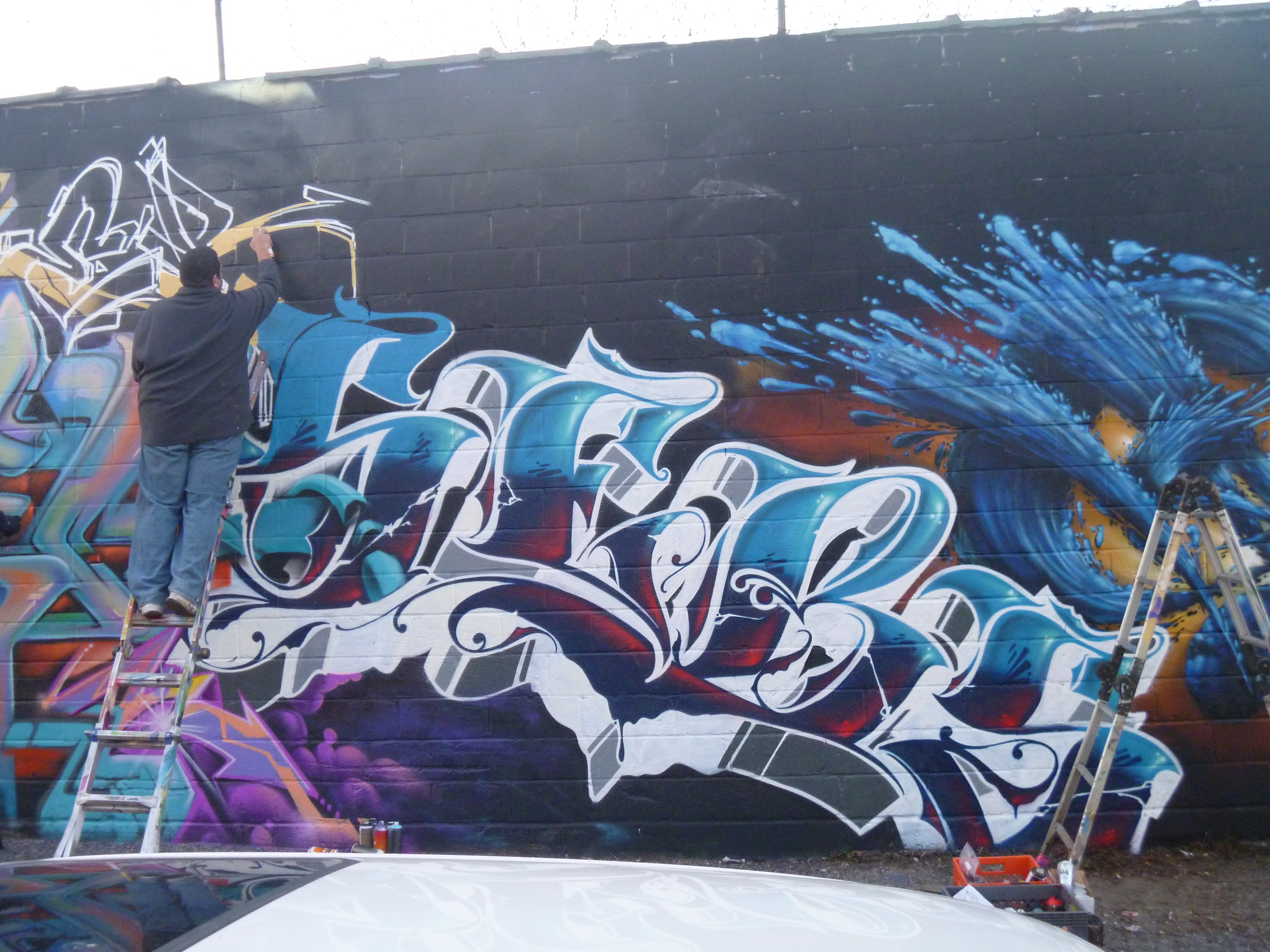 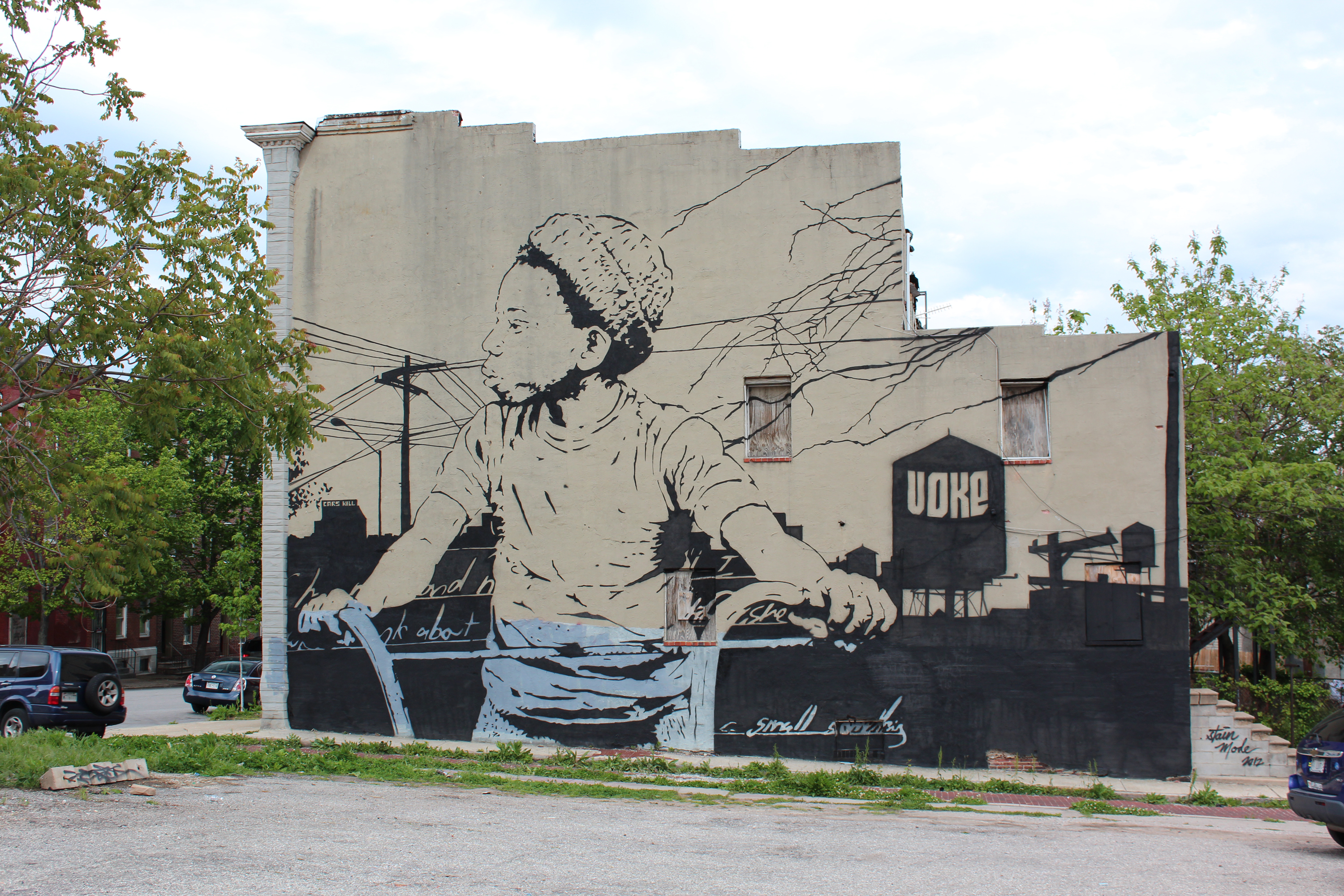 Chris Stain grew up writing Graffiti in Baltimore, MD in the mid 80’s. Through printmaking in high school he adapted stencil-making techniques, which later lead to his work in street stencils and an international recognition in the urban contemporary art world. Compared at times to the American Social Realist movement of the 1930’s and ‘40’s, Chris’s work echoes his upbringing and the people who helped shape his mental and physical landscape. His work illustrates the struggles of the unrecognized and underrepresented individuals of society. Chris currently teaches art part time in New York City and is pursuing a BA in Art Education. His book Long Story Short published by DRAGO press will be available in March. 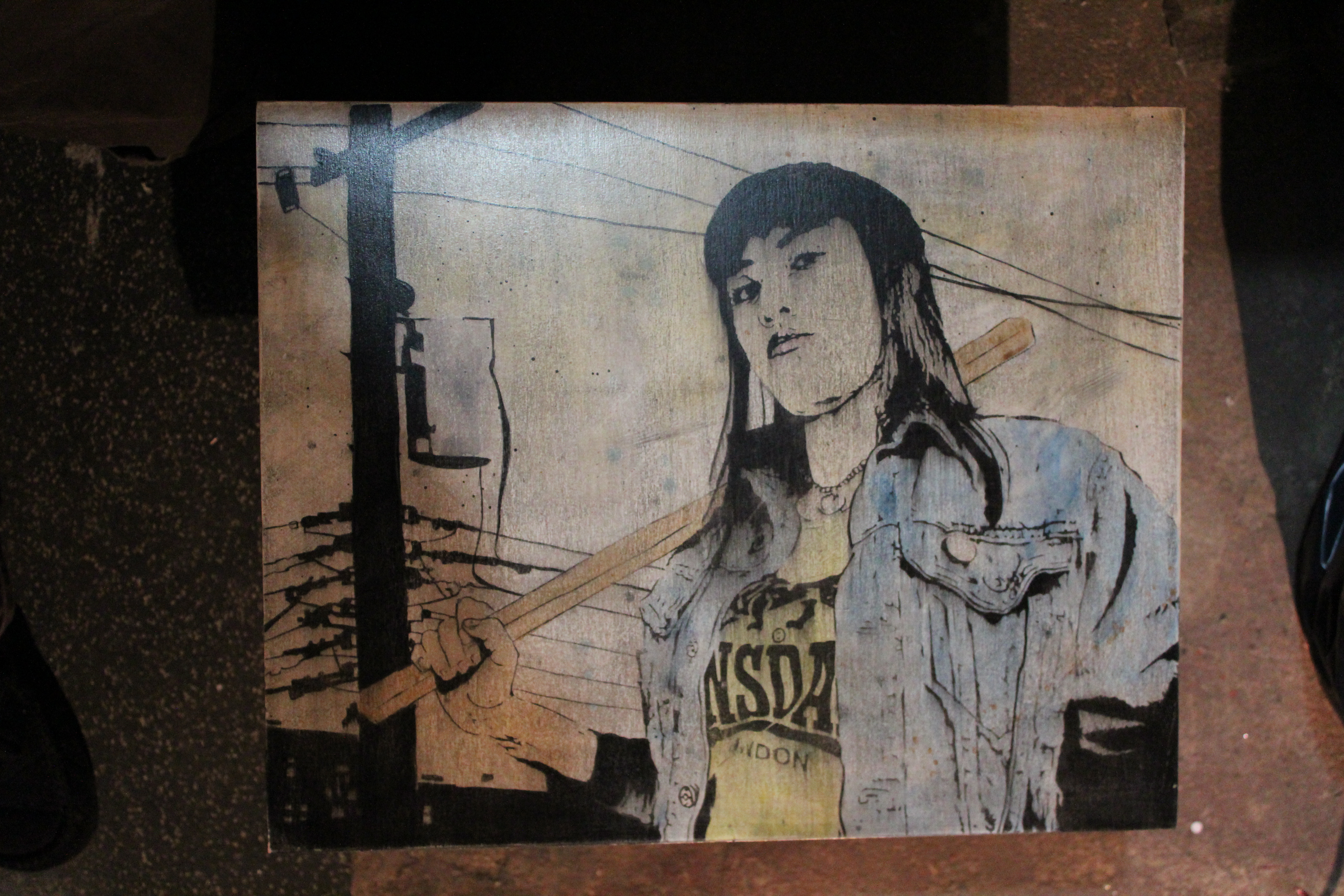 Ryan Seslow is an artist living and working in NY. Seslow is a professor of Fine Art teaching various studio art courses simultaneously between 4 colleges in NY. He is the creator of the accredited college course “The History & Emergence of Street Art & Graffiti.” The 3 credit art course runs between LIU Post campus in Brookville, NY & CUNY York College in Jamaica. Seslow has been involved in various capacities of writing graffiti and creating street art for over 20 years. 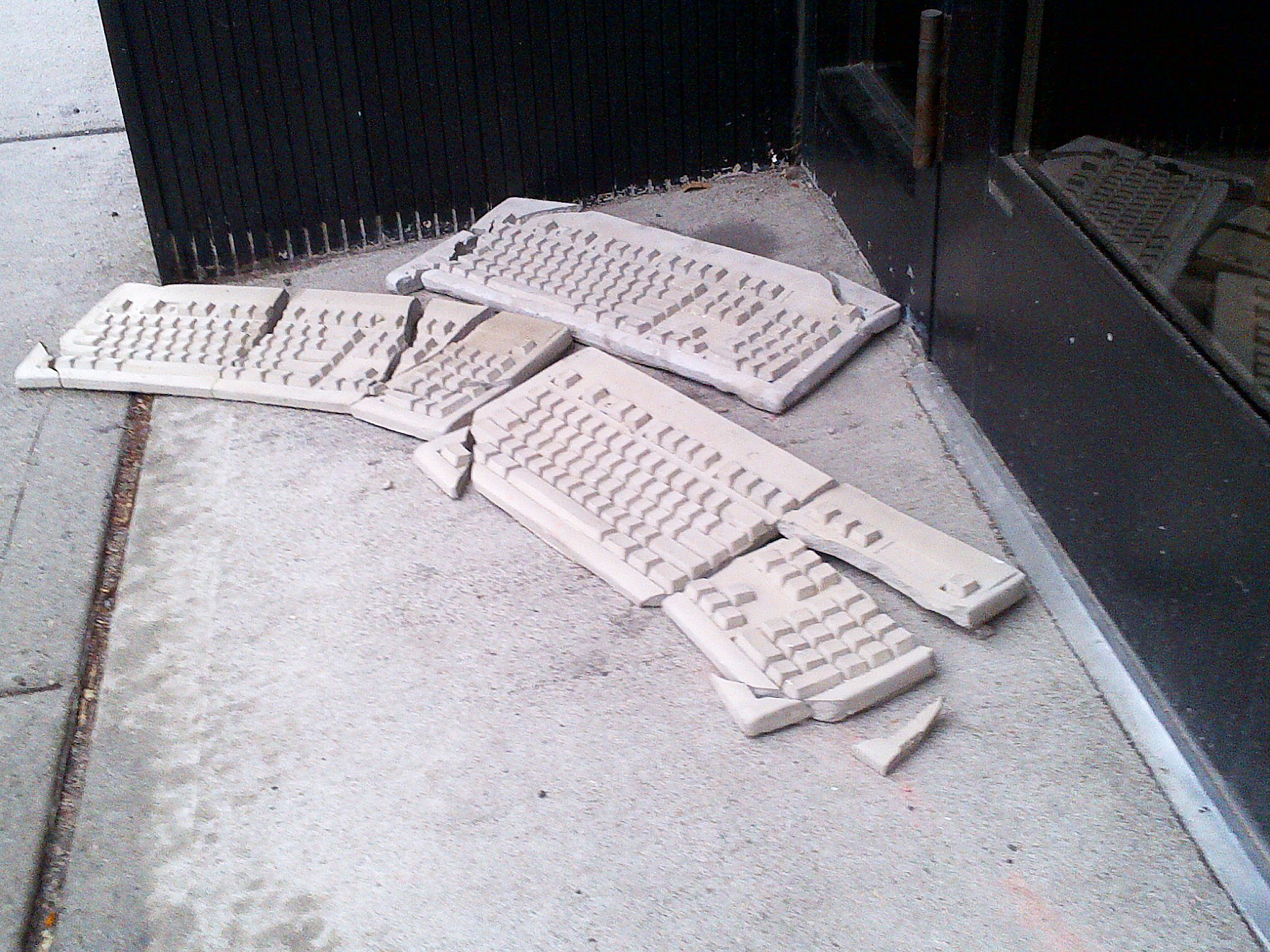 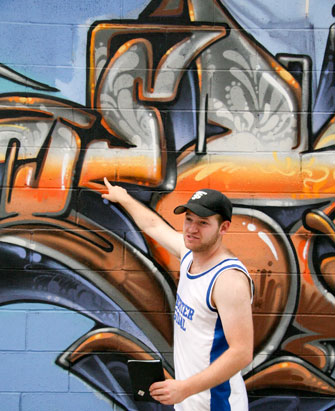 Gabriel Schoenberg is the founder of Graff Tours the first street art tourism company in North America. Graff Tours offers tours, workshops, and maps of New York City, Philadelphia, and Los Angeles. Gabe started with spray paint in High School, since Gabe has been writing under the tag “DWS2” and his work can be found all over the United States. Gabe is an expert in graffiti history and gives hundreds of tours a year. For more on Gabe’s company check out:

THE HISTORY AND EMERGENCE OF STREET ART & GRAFFITI

Course Description:: This course explores the emergence of street art and graffiti as a contemporary art movement. The course traces the history through its past and present artistic developments on a technical, stylistic, and cultural level. Students will draw from its New York roots and examine its growth in popularity, both nationally and internationally, from the streets to the gallery and museum walls. The course pays particular attention to the artists and writers from New York City. Students will use their written and oral communication skills to demonstrate what they have learned in various formats. The course includes a guided NYC walking tour and guest lectures. 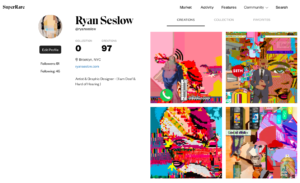