5/26/12 – In late 2009 after visiting several cathedrals and museums abroad, I began to re-revisit a lot of renaissance art.  I do reference such time periods in a lot of my teaching, but I usually tend to have a specific relevance in mind with the projects we are working on. Unconsciously I believe, I was seeking something else of a personal nature. In my examinations both online and through library research, I started to collect a series of renaissance images that inspired me. I very rarely feel the need to duplicate anything that already exists, but I do enjoy exercising the inspiration into other “suchness.” Leonardo da Vinci’s Last Supper had always captured my interest. I enjoy looking at the piece, and love how it holds my attention for long periods of time consistently. I took action. The drawing below is my rendering of the Last Supper from late 2009. It was drawn in 30 minutes using a black felt tip pen. I find a cubist influence in the overall abstraction of the drawing, as well as a graffiti influence in the heavy black stylized outlines. I was immediately happy with the drawing. You can click on the image to see it larger and inspect the line quality. 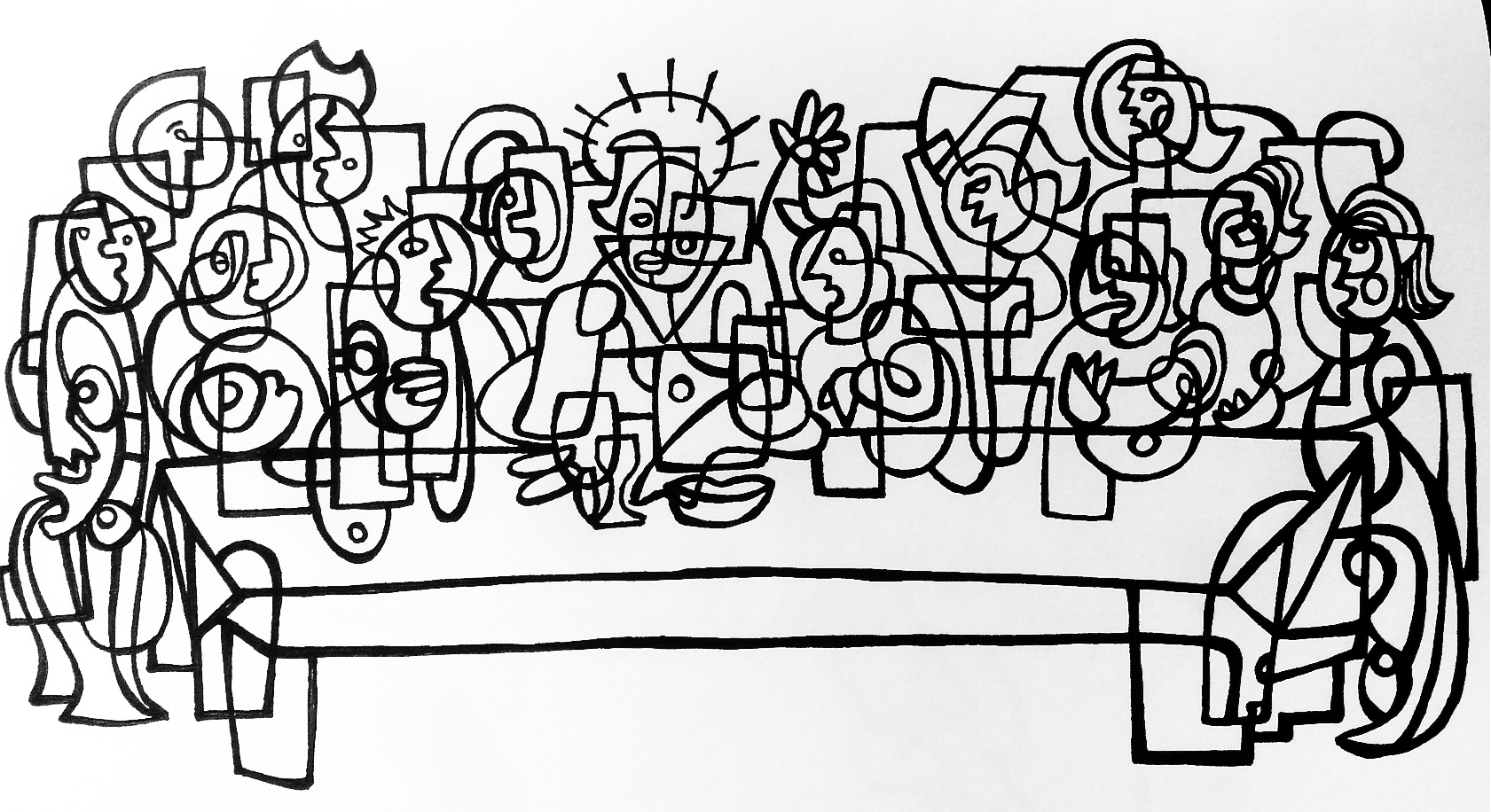 The Last Supper, this was the first rendering completed in a felt tip ink pen.

It was my intention at first (and it still is) to create a painting in full color using the drawing as a map to work from. I find this to be an effective method for works of all scales. I re-drew my sketch and blew it up using a black oil stick. It took about 2.5 hours to re-draw at the scale I was working in. Shortly after transferring the drawing onto the 7 foot by 10 foot piece of heavy weight large paper I removed the drawing to free up the same wall space. I had a commissioned project that needed immediate attention with a tight deadline. In the midst of the busy-ness of the months to come, I forgot about the piece altogether. About a year and a half later it had come to my attention that this was the case, and much to my dismay, I was not able to easily locate the large drawing. For the sake of storage, I tend to roll up several drawings on paper and un-stretched paintings that are sizes that exceed 36 x 48 inches. I am usually diligent with labeling the large rolls of finished and incomplete works, but in this case, it slipped away. The large rolls free stand on the floor like pillars. Currently in the studio there are 12 -14 of these rolls. They usually hold between 40 – 75 pieces per roll. I had temporarily lost interest in my search for the piece. It has taught me a lesson about being even more careful and impeccable with labeling both works in process and stored complete pieces. I have retained that from this contrasting circumstance, but yet something good continued to evolve. 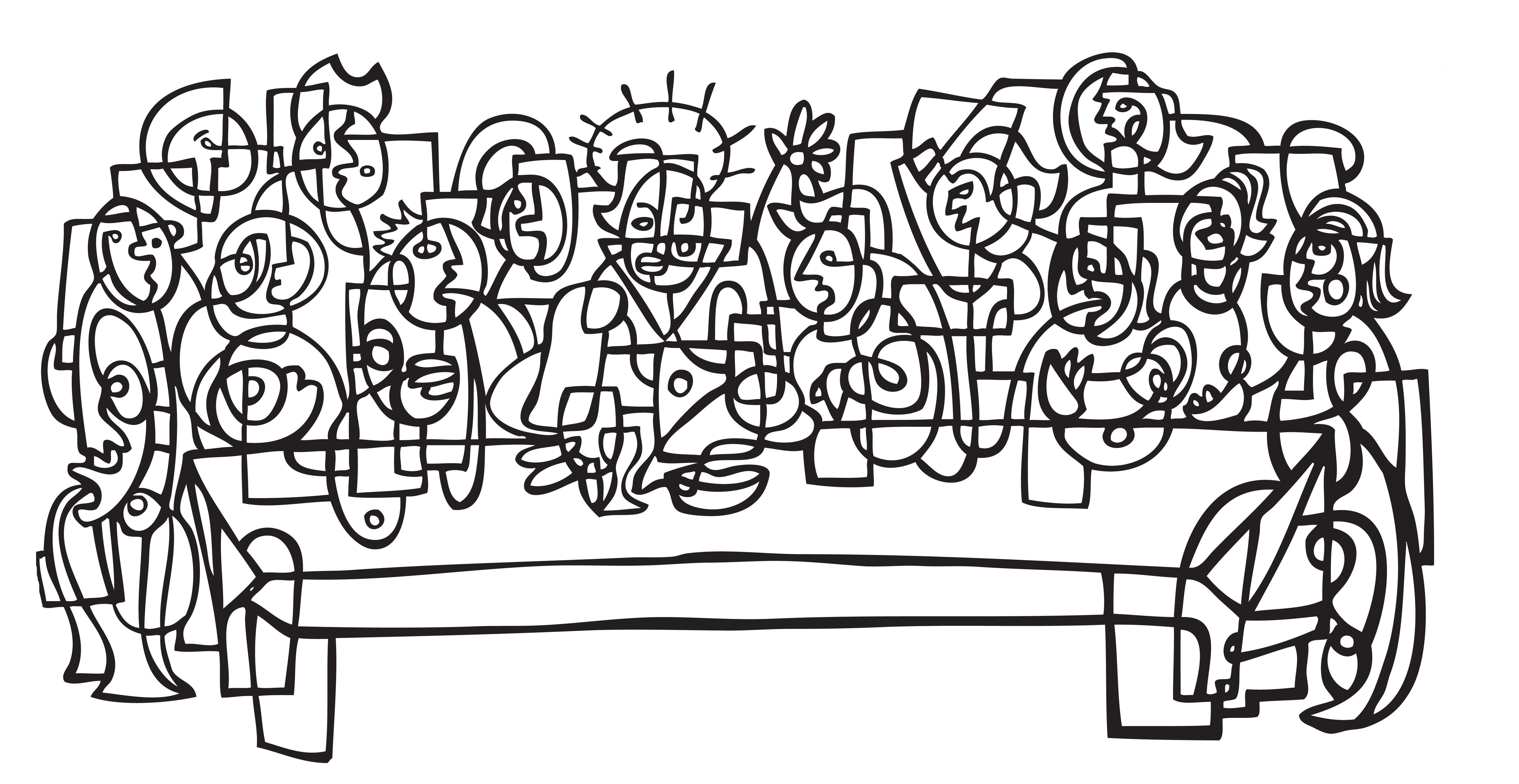 The final rendered image after using the “live trace” feature in Adobe Illustrator.

The image above has taken over this process, and it has reactivated my excitement for the piece which will now turn into a series of various techniques. I archive all of my works in progress by taking sketch photographs. These are usually low resolution images that I can easily access between computers and external hard drives. I stumbled upon the image last week and have since rejoined my process, only this time with a new approach. The image above (click on it to inspect it) has taken on a new life. When I re-discovered the image I made a print out of the drawing and re-scanned it back into adobe photoshop to play with the contrast. I love what technology can do when it is synthesized with the manual process. I saved the file and brought it into adobe illustrator. Using the “live trace” feature, the image quality had become even more fluid, giving it a vector and more graphic look. I feel that it compliments the original drawing. This is a technique that can be used for creating high-resolution silk screen printing image quality. Having the drawing in this format will allow for me to do a series of rough color studies both in photshop, as well as manually in water-color and colored pencil before I redraw it at the larger size. (ill make a series of black and white print outs for that.) So, in actuality losing the original large drawing was not such a bad thing. I may not have had the interest to work on it in a variety of ways had I directly completed the painting. One of my inspirations is the late great Buckminster Fuller. Bucky didn’t believe in mistakes, only learning and new-found awareness’ through one’s experiments and actions. I love that. I will re-draw the piece at the larger size, but in a variety of ways, and complete the paintings over the course of the next few months. I will share my process and progress in part two of this post.